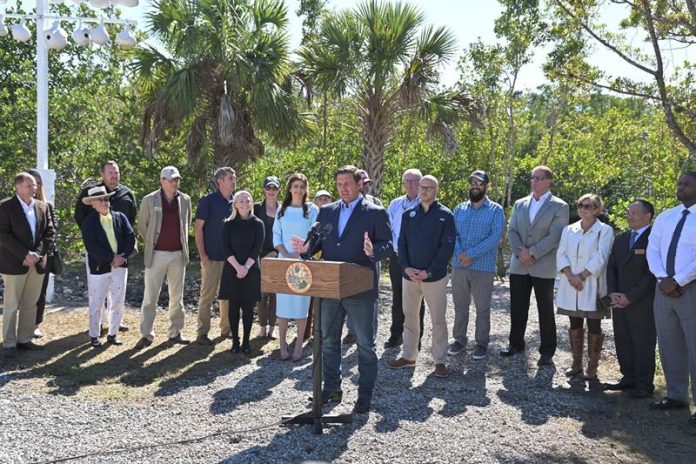 The governor of Florida, Ron DeSantis, today recommended the allocation of a budget line of more than 625 million dollars for the protection of the water resources of the state, including the restoration of the Everglades reserve.

According to an official statement that includes the announcement made today in Naples (southwest Florida) by the Republican DeSantis, who took office on January 8, his goal is that at the end of his four-year term, the investment made to protect the water of the state totals more than 2,500 million dollars.

This would be a billion dollars more than invested during the four years of the second consecutive term of the previous governor, also Republican Rick Scott, who was criticized for his lack of interest in preserving the environment.

Already in his message of assumption of office, DeSantis, 40, marked distances with his predecessor in environmental matters.

“Our economic potential will be at risk if we do not solve the problems that affect our water resources and the environment,” said DeSantis, who had the support of President Donald Trump in his career to the governorship, in which he had as a partner the now vice-governor Jeanette Núñez, of Cuban origin.

The new governor said today that the proposed budget that he will present “will have a substantial impact on water resources and the quality of life in Florida.”

In this regard, he stressed that the protection of the Everglades should never be a “partisan issue”.

In the first draft budget to be submitted to the state Congress, the governor will allocate a record of more than 1,700 million dollars to protect and preserve the environment.
The largest allocation in the environmental area -360 million- will be to restore the Everglades, the enormous biodiversity-rich wetland located in the center of the state.

One of the key actions in the Everglades is to expedite the use of thousands of acres of land near Lake Okeechobee in order to store water and not channel it into the estuaries, to “eliminate” thousands of annual liters of “phosphorus and contaminating nutrients” “

This fundamental reservoir proposal will “significantly reduce the water discharges of Lake Okeechobee” and will serve to end the massive discharge of water from the lake to several estuaries and rivers located in different counties.

The storage of water in the area called the Everglades Agricultural Area (EAA) is one of the “cornerstones” for the Everglades integral restoration plan, approved in 2000.

The EAA project will receive 107 million dollars, 43 million annual more than the 64 million expected, in order to “make sure that we are moving to move water to the south” and “restore the flow” of millions of liters per day.

The goal is that, since the waters are cleaned, they are channeled to the south, to the center of the Everglades, and from there to the Everglades National Park and the Bay of Florida, a plan that includes the elimination of the elements on the highway. Tamiami Trail, 276 miles (443 kilometers), which impede the flow of fresh water to the south.