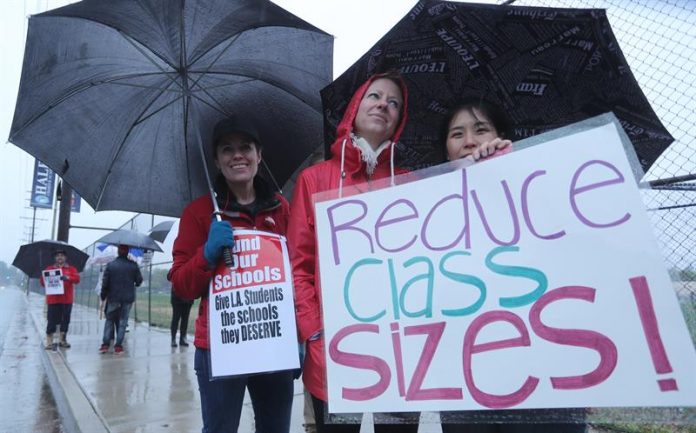 The board of the Los Angeles Unified School District (LAUSD), California, today approved not to create new “charter” schools, one of the high points that led to more than 30,000 educators in the county earlier this month. .

The new measure is part of the negotiation between LAUSD and the teachers’ union (UTLA), which ended the six-day strike of educators and affected about 600,000 students, in addition to leaving an estimated loss of 151 million dollars in revenue for the District.

However, the initiative directs the LAUSD superintendent to “present a plan to seek laws that intend to authorize a moratorium on new charter schools within the District’s boundaries.”

As noted today by LAUSD Superintendent Austin Beutner, “there is nothing in this resolution that closes (or suspends) any of the current schools.”

Beutner stressed the importance of this revision, after 26 years of being authorized charter schools.

One hour earlier, the LAUSD board had approved the terms of the agreement with the teachers, which did not include the charter resolution.

The measure passed today also calls on the governor, the State Board of Education and the California Department of Education “a comprehensive study to inform future policy considerations for the reform of charter schools.”

It also urges state legislators to suspend the authorization of new schools of this type in LAUSD until the requested study is approved.

For the defenders of this type of school, which work partly with public budget, the resolution “is a call to action” that favors a change in public opinion about the type of education that parents want for their children.

“There are people who want to limit our aspirations and our dreams, and we have the right to speak with our own voice,” Myrna Castrejón, executive director of the California Charter Schools Association (CCSA), said at a previous rally.

Currently, there are 224 independent charter schools in LAUSD that group 110,000 students.

In California, 1,306 schools of this type operate, with more than 628,000 students, according to data from the State Department of Education.

The strike organized by the union of angelic teachers demanded less concentration of students per class, better salaries and the presence of health personnel in schools, among other requirements.