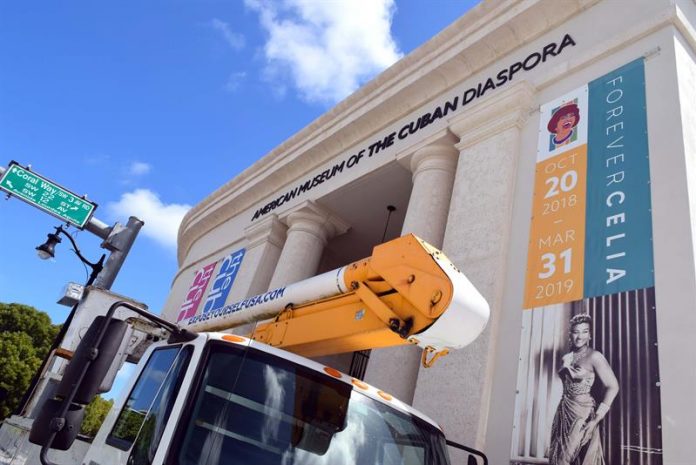 Of the 78 years that Celia Cruz lived, at least 60 are chronologically collated in the largest display of personal items of “La guarachera de Cuba”, which the American Museum of the Cuban Diaspora shows from today in Miami under the title “Forever Celia. “

“Celia is always on the table, but never before have we managed to gather so many things from the audience,” the singer’s representative, Omer Pardillo, also curator of the exhibition, told Efe.

“This year marks the 15th anniversary of Celia’s death and what better city than Miami to commemorate him, although she never lived here,” recalls Pardillo as he walks between mannequins through salons that are the “time machine.”

Twenty dresses, 20 pairs of shoes, 18 wigs, countless stationery, including the passport he used in 1959 to leave Cuba, where he never returned, photos never exhibited, trophies, Grammy awards, records and city keys are some of the treasures de Pardillo, who met Celia in New Jersey when he was 14 years old.

“Now that Celia is not in this world, I can show her picture in trusa (swimsuit), which she asked me to keep until after her death,” says Pardillo, also from Cuba.

Pardillo, who accompanied Celia for more than half the world in tours and concerts, went back to touring infinity of countries in search of objects of her friend who owned private collectors.

Many of these objects, such as the artist’s first passport to travel to Venezuela in 1948 with the Anacaona women’s orchestra, will be in public view for half a year at the Miami museum.

After the success in 2005 of an exhibition of costumes and personal objects of Celia Cruz in the Museum of American History (Smithsonian), where there is a permanent collection on the artist, Pardillo wanted to incorporate also his “office” and other environments that are moved, like an “interactive” makeup room.

In another environment recreates the trip that made Celia to Zaire, today Democratic Republic of the Congo, in 1974 with the band Fania All Stars as a complement to the epic boxing fight between Muhammad Ali and George Foreman.

The video of the legendary interpretation of “Guantanamera” that Celia made on that trip is shown in “Celia Forever” next to the colorful dress she wore on that occasion.

Another hyperrealistic installation recreates the trip to the US Guantanamo Naval Base in 1990, when Celia stepped on the island, but not her homeland.

The artist took land “under the fence with the desire that he was next to her when she died, and that’s how it was done”, recalls Pardillo, a meticulous collector, who shared with Celia a mania: she “kept everything”.

That is why today you can travel through “your things” from the 50s until his death by a brain tumor at age 78, which occurred on July 16, 2003 in New Jersey.

The exhibition, which opens with a school photograph of the course 1938-1939 in Havana, closes with those of the two funerals of the extroverted woman, the one that was made, present body, in the Freedom Tower of Miami and the one of the Cathedral of St. Patrick’s, in New York.

Begin “the journey” with a song title and end with another: “Caramelo a kilo” and “I will live”.

Ileana Fuentes, director of the American Museum of the Cuban Diaspora, tells Efe that, despite having already been officially opened and having previously hosted an artistic exhibition, “Celia Forever” is for her “the grand opening” of this dedicated institution not to art but to “historical memory”.

“This is an American story, from the United States, that simply can not be swept away, our grandparents and parents are buried in this country” and the mission of the museum is to show the life “of the two and a half million Cubans who are scattered by the world, “he emphasizes.