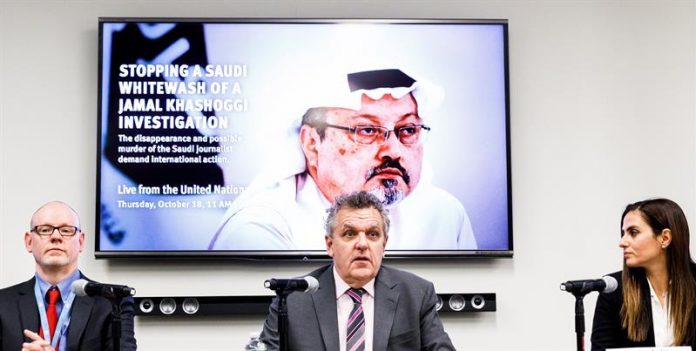 Some of the most important human rights organizations in the world today argued that the UN should investigate the alleged murder of Saudi journalist Jamal Khashoggi to avoid a cover-up operation.

Human Rights Watch (HRW) and Amnesty International (AI), together with the Committee to Protect Journalists (CPJ) and Reporters Without Borders, want Turkey to request such investigation from the head of the United Nations, António Guterres.

This was announced at a press conference at the UN headquarters, where they insisted that the investigations announced by Saudi Arabia are not enough and it is necessary to have a “credible” investigation.

“We believe that the only way for there to be no cover-up on the disappearance of Jamal Khashoggi is for the UN to take charge of an independent, transparent and international investigation,” said CPJ Deputy Executive Director Robert Mahoney.

So far, the United Nations has limited itself to contact the Saudi authorities to express its concern after the disappearance of Khashoggi on October 2 after entering the consulted of his country in Istanbul.

According to several press reports, citing Turkish sources and recordings, the journalist was tortured, beheaded and dismembered.

The New York Times and other media reported on Monday that Saudi Arabia plans to acknowledge that Khashoggi died in his custody in an interrogation that got out of hand and blame it on an official friend of the Crown Prince.

Today, Guterres’ spokesman, Stéphane Dujarric, said that the secretary general is waiting for the results of the initial investigations and made it clear that the organization will only intervene if requested by the parties involved.

Therefore, instead of going directly to the UN, the NGOs want Turkey to make that request and defended that it is the best way to achieve some kind of result.

“We want the Turkish government, which unfortunately, like Saudi Arabia has a lousy record of treating journalists, to step forward and use this opportunity to move forward,” said Louis Charbonneau, HRW’s director for the UN.

The NGOs said they had contacted the Turkish mission to the United Nations and that, for now, they have not received a response to their request.

If Ankara does not move, human rights organizations expect other countries to put pressure on the Turkish government and will also seek other avenues.

The four NGOs put on the table a precedent for an investigation of this type by the UN, recalling the carried out in 2008 on the murder of the former Prime Minister Benazir Bhutto Pakistani at the request of the Government of his country.

The director of the New York office of Amnesty International, Sherine Tadros, defended that without an independent investigation they will always plan suspicions about the Saudi authorities for the disappearance of Khashoggi.

Tadros stressed that the Khashoggi is not an isolated case, but is part of a context of growing repression against dissident voices in Saudi Arabia since the Crown Prince, Mohamed bin Salman, took office.

For the Committee to Protect Journalists, if the disappearance and alleged murder of Khashoggi is not clarified, all media professionals will be told that “their lives do not matter and that States can kill them with impunity.”

“We have seen the disappearance and, according to information, the dismemberment of a columnist from the Washington Post, residing in the United States, on a Saudi diplomatic mission in Turkey, which sends an incredibly chilling signal to journalists around the world,” Mahoney said.