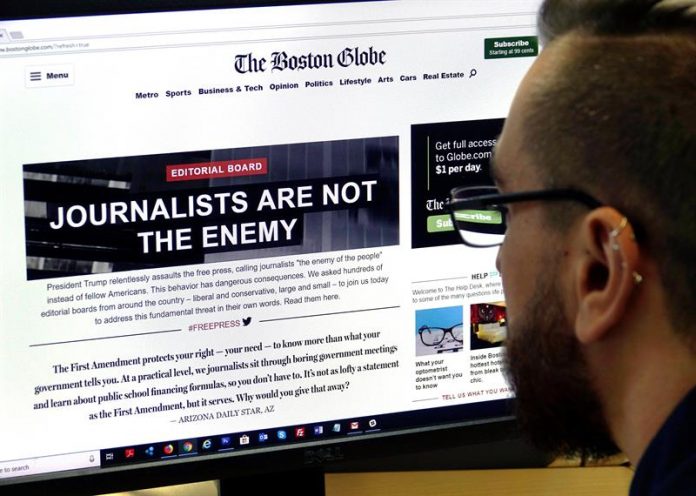 More than 300 newspapers in the country today defended freedom of the press in their editorials, published in a coordinated manner, in which they denounce President Donald Trump’s attacks on journalists and the media since his arrival at the White House.

The usual “false media” (“fake news”), which Trump uses several times a week, the president has added insults to journalists and has come to catalog the press as “the enemy of the American people.”

In its editorial today, The Boston Globe, founded in 1872 and promoter of the initiative, emphasized this last reference, which considers dangerous for press freedom, protected in the first amendment of the Constitution.

“Calling the press ‘the enemy of the people’ while going against American values ​​is also a danger to the civic fabric we have shared for more than two centuries,” said the letter.

In addition, The Boston Globe defended that “the greatness of the United States depends on the role of a free press that can tell the truth to the powerful”.
For its part, The New York Times appealed to citizens and told them that the press “needs” them.

His editorial starts with a historical reference, when in 1787, the year in which the Constitution of the United States was adopted, Thomas Jefferson wrote to a friend: “If I had to decide if we should have a government without newspapers or newspapers without a government, I would hesitate a moment to prefer the last one “.

The New York newspaper also asked Americans to subscribe to local newspapers in their cities to protect the right to information.

The common front was joined by both large circulation newspapers of large cities and local newspapers, including headlines such as The Houston Chronicle, Chicago Sun-Times, Minneapolis Star Tribune, Miami Herald or Denver Post.

“We ask the editorial boards of the entire country -progressives and conservatives, big and small-, to join us in addressing this fundamental threat in their own words,” the Globe remarked.

Beyond newspapers that have a political position different from Trump’s, there are other media related to the president who have expressed their dissatisfaction with the treatment that the press receives from the Oval Office.

One of them has been the Topeka Capital-Journal, a newspaper of the state of Kansas that supported Trump in its editorial during the presidential campaign, coming to describe the magnate as “the best decision to lead the United States in the future.”

However, the editors of the Kansas newspaper today recalled that the expression “enemy of the people” has been used previously by regimes such as the Soviet Union against dissidents or Nazi Germany against Jews.

Before this wave of criticism, Trump left today to defend himself on Twitter repeating that the “false media” are the “Opposition Party”.

In this regard, Trump said that “there is nothing he (he) would like more” for the United States than “the true FREEDOM OF THE PRESS”.

“The fact is that the press is FREE to write and say everything you want, but much of what it says is FALSE NEWS, promoting a political agenda or simply trying to harm people,” the president said.

These continuous offensive references from the president to the press have raised concern among several international organizations, such as the UN and the Inter-American Commission on Human Rights (IACHR), which have expressed their bewilderment and have warned of the danger that these ruthless criticisms pose.

“These attacks are contrary to the country’s obligations to respect freedom of the press and international human rights law,” the special rapporteurs for freedom of expression of the UN and the IACHR, David Kaye, said in a joint statement this month. and Edison Lanza.

The experts also expressed their fear that journalists “may suffer acts of violence” because of the negative comments made to them by Trump.