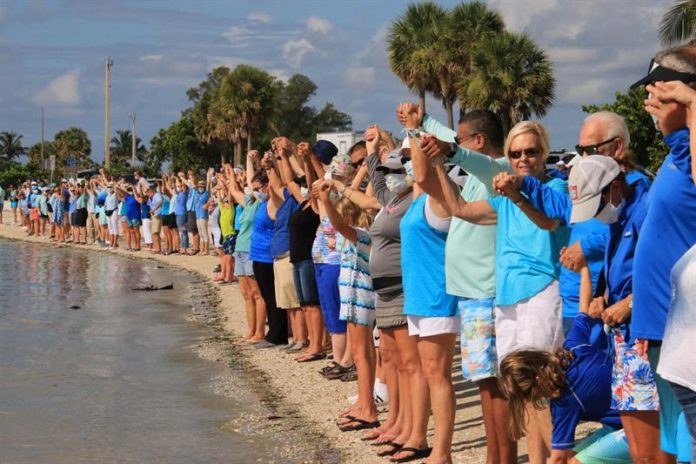 The growing concern of Floridians for algae pollution suffered by the beaches of its touristy state has been transformed into a movement to demand politicians to uncork arms and seek solutions as soon as possible.

Thousands of people responded to the call made by the group “Hands Along the Water” (“Hands along the water”) and joined hands this Sunday to form a human chain on the shores of the beaches both on the coast This one from the west.

Rebekka Lee, one of the organizers, told Efe today that they have not planned to call new protests on the beach, but they have begun to analyze other possible actions in parks and in the headquarters of the municipalities throughout the state.
Definitely, “we want to do something more,” he said without giving further details.

With hands clasped for 15 minutes and faces masked, demonstrators expressed frustration at an ecological crisis that is threatening the state’s marine life, especially on the Gulf Coast of Mexico (west).

After several weeks of watching in the newspapers and televisions the images of thousands of fish, dolphins and other marine animals killed in the sand or of waters dyed a blue-green color worthy of an artistic installation, today the image that stands out in all the means is that of the string of bathers united against pollution.

It all started with a message on social networks: “What would happen if 5,000 or 10,000 of us held hands one morning on the beaches from coast to coast? We would be on every television channel in the country.”

“Do you have 15 free minutes to dedicate to our beaches and our fauna?” Asked the organizers of the movement.

The echo that had this message was notorious and a warning to the authorities of the state, which have been criticized for their lack of response to a problem that had already occurred in other years, but not with the intensity that is having this summer.

On Sunday there were demonstrations in about thirty places on the Florida coast, from St. Petersburg, Tampa, Ft. Myers and Naples, on the west coast, to Miami, Fort Lauderdale and Cocoa Beach, on the east coast.

In the Gulf of Mexico, where some of the beaches that are listed as the best in the country are located, the fundamental problem is the proliferation of a microalgae, the “Karenia brevis”, which ends with the oxygen of the marine waters.

The so-called “red tide” is a problem that usually occurs every year on the coasts of western Florida, but this summer has had an unusual magnitude.

Environmentalists are wondering if the problem has been aggravated by a highly harmful blue-green algae that comes from the polluted Lake Okechobee, in the center of the state, and that has spread by rivers and channels to reach the sea, especially in the east coast, due to the discharges that are regularly made in an aging dam.

The algae are “killing our marine life, this is my house, I do not want to see her die,” said Rebekka Lee, one of the organizers of the beach movement in Fort Lauderdale.

In humans, the proliferation of green algae can cause nausea and neurological problems in people, while the western microalgae cause respiratory irritation.

That is why “Hands Along the Water” advised protesters concerned “for their health and immune system” to wear masks and shoes and leave pets at home, because “the red tide and toxic algae are a danger.”

In accordance with the nature of this movement, the protesters brought water in recyclable bottles and did not carry signs or other propaganda because “Hands Along the Water” does not want to “leave trash behind”.

The concern is not only for the environment but for tourism, which is the number one industry in Florida, a state that in 2017 received a record 116.5 million national and international visitors, 3.6% more than in 2016

This peninsular and southern state has coasts to the Atlantic Ocean and the Gulf of Mexico and looks out to the Caribbean for its famous and picturesque cays. Its beaches, which together have an extension of 825 miles, are a powerful magnet for tourists.