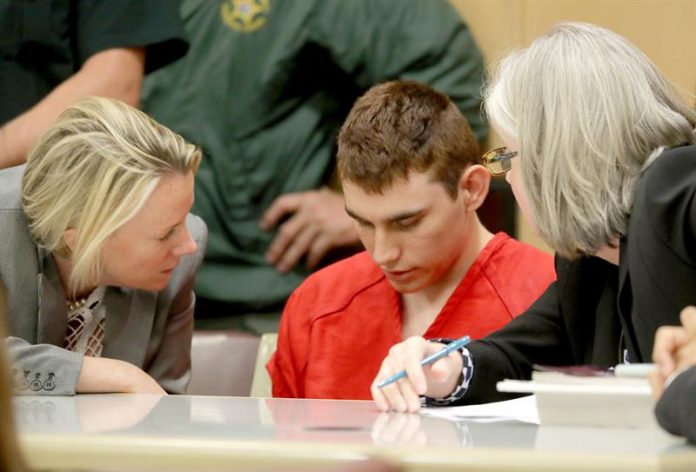 The young Nikolas Cruz, accused of the murder of 17 people in a shooting at a high school in Parkland, Florida, told police when he was arrested that he had a “demon” inside his head ordering him to “hurt people “, as has been known almost six months after the massacre.

What Cruz, 19, told Detective John Curcio on February 14, 2018 has been kept out of public view until Monday, when the Broward County District Attorney’s Office released a transcript of the interrogation.

For today it was planned to make public the videos of the interrogation, but the Prosecutor’s Office confirmed to Efe that finally they will not do it, because they need to clarify some judicial issues.

Shortly after the shooting at Marjory Stoneman Douglas School in Parkland, Cruz was detained and interrogated by Curcio, who confessed to having killed 17 people with an assault rifle and injured others in the center of which he had been a student.

Cruz said it was a “voice” in his head that he had heard since his adoptive father died the one he said the night before that he “hurt people.”

It was that voice, which ensures that he began to hear more often after the death of his adoptive mother in November 2017, which suggested he take an Uber and go to his old school last Valentine’s Day.

“For me, it’s me and my bad side,” Cruz said of the voice he heard in his head.
“I do not like the devil, I’m afraid,” repeats the young man before Detective John Curcio of the Broward County Sheriff’s Office in a statement contained in 217 pages, of which 80 have some hidden content.

What is kept out of the public eye are the details of the shooting so as not to disturb the survivors or the families and relatives of those who died in the Marjory Stoneman Douglas.

During the interrogation the detective counts more than six weapons in Cruz’s possession, which he bought to “protect” himself from the demon he heard in his head, which he also considered an “imaginary friend”.

“I do not have anyone else,” said Cruz, who asked a psychologist during his testimony to find out “what was wrong with him.”

A voice in his head that suggested “burn, kill and destroy whatever it was”, something that until the day of the massacre he did with animals such as chickens and birds.

To try to eliminate that voice in his mind, the young man confessed to having taken “many drugs”, such as “Xanax”, a drug used for panic attacks and panic attacks, and marijuana.

In addition, he tried to commit suicide two months before the massacre through an overdose of ibuprofen, as well as through the abusive intake of alcohol, suicidal thoughts that he claimed to have often for his “loneliness”, especially after the death of his mother.

“Kill me, just kill me,” said the young man when the detective left the room to fetch water.

“I want to die, in the end you’re nothing more than despicable, you deserve to die because you’re mean (bad words), I want to die,” he repeats in another extract from his statement to the inspector.

One week before February 14, the young man thought to go to a park, without specifying one in particular and perpetrate the massacre there, but finally he did not.

What led him to finally go to school was that his depression “worsened”, in addition to the memory of a fight he had with another student when he was studying there.

When the detective read him the rights, Cruz, who faces 17 counts of premeditated murder and many others for attempted murder, said he “did not deserve them (rights).”

A feeling of guilt that surfaced especially with the visit of his brother Zachary Cruz to the Broward sheriff’s office.

The AR-15 assault rifle with which he opened fire in the 12th high school building bought it “a year or two” for $ 560 legally, and said he did it to “feel safe,” something his mother knew.

He estimated a total of $ 4,000 that had been spent on weapons and ammunition, at stores like Dick’s Sporting Goods, the largest arms retail store in the United States, which stopped selling assault rifles and restricted arms sales to children under 21 years after the Parkland shooting.

Asked by his surname “Cruz”, he said he did not think he was “Latino” but “white” and also said that he liked to listen to “sad” Russian and German music, as the “demon” ordered him.

The report argues that he should have obtained special help at the school itself.