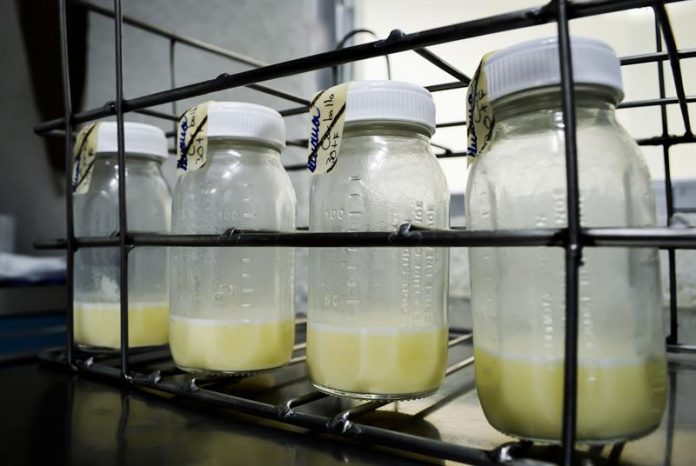 Breast milk provides all the nutrients required by newborns, however, sometimes the mother does not produce enough milk or suffers from a disease that prevents her from feeding her baby, which is why the milk banks were created.

“No child born with a weight less than 1,500 grams is fed with formula, you definitely have to provide breast milk,” says Efe Silvia Romero Maldonado, coordinator of the Human Milk Bank of the National Institute of Perinatology (Inper) .

The specialist explains that this food “avoids lactose intolerance, infectious processes such as enterocolitis, sepsis and gastric intolerance such as abdominal distension that can lead to necrotizing enterocolitis.”

Also details that, among its benefits, are that bronchial asthma, atopic dermatitis or allergenic situations decreases.

“We already managed to show that the intake of breast milk helps to avoid nosocomial infections, as well as enterocolitis and bronchopulmonary dysplasia that leads children to the use of oxygen,” says Romero Maldonado.

In Mexico there are 39 Human Milk Banks, of which they already operate formally.

The largest is located in the Inper, which collects about 150 liters of breast milk per month, according to information provided by Romero Maldonado.

The Inper, abounds, has managed to feed up to 650 babies a year with the milk collected.

The Human Milk Banks operate the same as blood banks, through donations.

Women who are breastfeeding and have excess milk can be donors provided they are clinically healthy, do not consume drugs, are not carriers of human immunodeficiency virus (HIV), hepatitis B or C and do not use drugs, alcohol or tobacco.

“We give them information on how to perform the extraction and how to freeze milk if they do not want to bring it to the Institute,” says the specialist.

Romero Maldonado explains that 90% of the time the Inper goes to the house of the donators and transports the product in a cooler with freezers.

“When it arrives it is quantified, cleaned with an alcohol gel and pasteurized two to three times a week,” he says.

This, he says, is because the milk is not completely sterile because it carries some bacteria from the mother’s flora.

“That is why it is pasteurized, although it loses a large number of defenses, there can be up to 70% of immunoglobulins, which will give the baby defenses,” he adds.

According to the statistics of the Ibero-American Network of Human Milk Banks, South America is the region with the highest number of Milk Banks and, consequently, with the highest rate of donors, liters collected and patients benefited.

In the most recent data of the agency published in 2016, it was said that South America managed to obtain just over 1.4 million liters that were provided to just over 1.6 million newborns.

In Latin America, Argentina is the country with the most milk banks, since it has 259, followed by Brazil, with 220, and third place is occupied by Mexico, with the 39 mentioned.

The week of breastfeeding is commemorated from August 1 to 7 in order to raise awareness and promote this practice in the population worldwide.