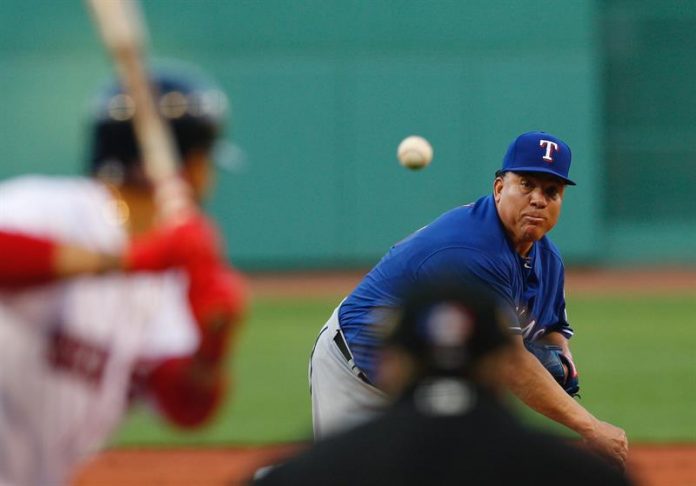 Star night starred the Latin American pitchers who lived a day of dueling from the mound in which highlighted the veteran Dominican Bartolo Colon who beat the Venezuelan Felix Hernandez.

While another Dominican, the young Adalberto Mejía was also imposed on another star Venezuelan starter, Carlos Carrasco.

Colon surpassed Hernandez, second baseman Venezuelan Rougned Odor hit his fourth homer in the month of August and the Texas Rangers won by beating the Mariners 11-4 in Seattle.

The great quality duel from the mound allowed Colon (6-10) to stay with the victory after launching seven episodes, he accepted eight hits, two homers and four runs.

The Dominican made 94 pitches, 60 of them were perfect and left in 5.18 his average of effectiveness after facing 28 enemy batters.

Odor (14) sent the ball into the street in the sixth inning, leading a runner ahead of Hernandez’s shipments and was his fourth homer in the last six games of the month of August, and he left his batting average at .271 .

Beltre (6) also punished Hernández with a homer in the sixth episode, with no teammates ahead, with two “outs” at the entrance.

For the Mariners, Dominican designated hitter Nelson Cruz (30) sent the ball to the street in the second episode against Colon, with no runners ahead, no outs in the account.

Mejía beat Carrasco on the mound and the Minnesota Twins defeated the Cleveland Indians at home 2-3, in the duel of leading teams in the Central Division of the American League.

The victory was the second for Mejia (2-0) who threw five innings, allowed unstoppable, gave a walk and retired three batters via the punch to get the victory.

The Dominican made 68 pitches, 42 strike, and left 2.01 his effectiveness after facing 18 enemy batters.

For the Indians, Puerto Rican shortstop Francisco Lindor (28) sent the ball to the street in the eighth over the relay Trevor Hildenberger, with no runners ahead.

Dominican designated hitter Miguel Andujar hit back in the seventh inning and in the thirteenth he drove in the victory of the New York Yankees, who won 3-4 to the Chicago White Sox.

Andújar (15) hit four corners in the seventh against Dominican starter Reynaldo López, solo solitary, without outs in the inning.

In the thirteenth he added a single to the left tug of the race that sealed the victory of the Yankees, who are still struggling to reach the lead of the American League East Division.

For the White Sox, Cuban first baseman Jose Abreu (20) hit a homer in the tenth with a runner chasing the pitches of the Zach Britton relay.

The Dominican Ranger Starling Marte sent the ball to the street and the Pirates of Pittsburgh overcame home 2-10 to the Colorado Rockies.

Mars (17) took the ball from the field in the first, alone, to decipher the pitches made by starter Chad Bettis, when there was one out in the episode.

The young Dominican Ranger Juan Soto hit the whole back for the Washington Nationals, who lost 1-3 against the Atlanta Braves in the second game of the doubleheader that both teams played in the Eastern Division of the National League.

Soto (14) sent the ball to the street in the first, bambinazo solo, to hunt the serpentine of the opener Sean Newcomb.

The Rangers Dominican Franmil Reyes hit the first of three homers of the San Diego Padres, who won 5-11 at the Brewers of Milwaukee.

Reyes (8) sent the ball into the street in the fourth inning with no runners ahead when punishing starter Chase Anderson, when there was one out in the inning.

Dominican Ranger Manuel Margot (5) also hit a full drive back in the fifth inning, with no runners ahead, on Anderson’s work.

Colombian pinch-hitter Dilson Herrera sent the ball to the other side of the fence for the Cincinnati Reds, who beat the New York Mets 1-6 at home, in a duel of losing teams in the National League.

Herrera (2) did it in the ninth inning, with no runners ahead, by overcoming the work of closer Jacob Rhame when there were no “outs” in the account.