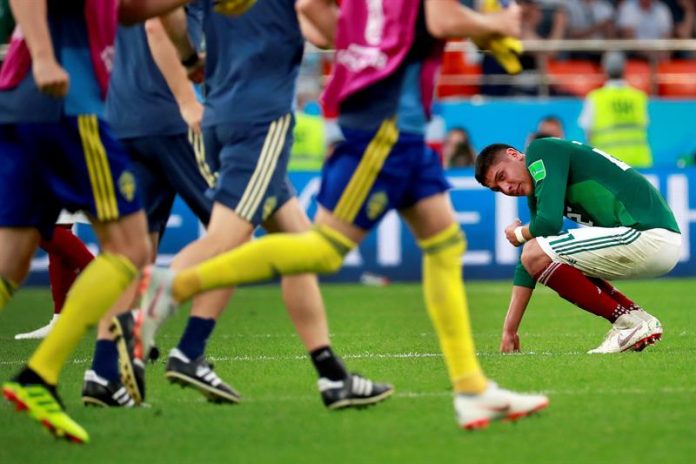 For the fans of the Mexican soccer team the qualification to the knockout stages of the World Cup marked this Wednesday a before and after in the Tri’s history because for the first time they will not cry before their cursed epitaph: “Mexico played like never before and lost as always”.

In one of their worst matches in the history of the World Cup, the Mexicans deflated and were thrashed 3-0 by a Sweden that went over them, but they agreed to the 16 best phase thanks to a miracle that seemed to come from a magical realism novel: Germany lost 2-0 to South Korea.

Mexico began to lose to Sweden at 14 seconds when Jesus Gallardo received a yellow card as a result of nervousness and then there was a lack in the area in favor of the Europeans that the VAR did not pass as a penalty but it began to make clear who dominated.

At nine o’clock in the morning the country stopped and shortly after 10 o’clock arrived the first blow with the goal of Augustinsson (m.50), which was followed by a stab in the form of a penalty by Granqvist, in the 62nd minute, and a self-goal of Édson Álvarez, in 74.

The Colombian Juan Carlos Osorio, criticized because in none of his matches with the national team he repeated alignment, this Wednesday he came out on the court with the same team that beat Korea, but his midfielders were confused, his nervous defense and the strikers outside tino

Mexico, first eliminated team in the history of the World Cups with six points, Mexico again lost the good, Mexico played as always and lost as never, repeated the weeping fans, but the champion Germany stopped being in the worst way, surpassed by the humble Koreans and that changed the history of Mexico.

It was an outcome that ended with two myths. Mexico will not repeat its epitaph anymore and for once the almost prophetic phrase of the English goalscorer Gary Lineker was uncertain: “Soccer is a sport in which eleven against eleven play and Germany always wins”.

The Mexican writer Benito Taibo often repeats that magical realism is present in everyday Mexico. Today the country’s soccer has known what it is and its good performance in the first two games has added a favor of the goddess Fortuna, after being humiliated in the third.

The fans do not recover from the emotional blow to be in the second round for seventh world followed and superstitious as they are, after passing over the damn epitaph, have green light to be protagonists of his own novel in colors.

You can imagine the scorer Lozano surrounded by yellow flowers, the coach Osorio flying to heaven wrapped in a sheet and the entire team obsessed, not with gold fish as the character in the best novel of magical realism, but with the World Cup, so impossible to conquer as Korea beats Germany.