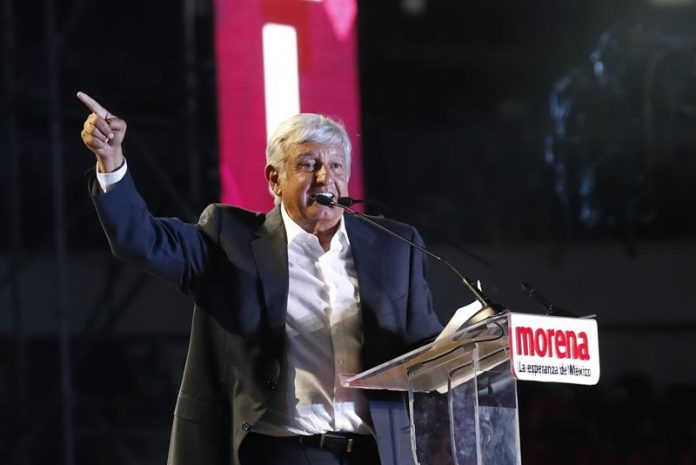 Like a rock star and proclaiming himself the winner in front of 80,000 people, leftist leader Andrés Manuel López Obrador closed his presidential election campaign today at a crowded Estadio Azteca in Mexico City.

Favorite in all the polls, López Obrador -bearer of an alliance of Movimiento Regeneración Nacional (Morena), Partido del Trabajo (PT) and Partido Encuentro Social (PES) – assured that he will win the elections this July 1 and will take Mexico to a new “transformation”, where corruption and injustice will have no place.

A well-known but highly effective speech, as the militants and supporters who flooded the venue, celebrated with applause and ovations every phrase of the pointer in the polls.

“There will be no reprisals, we will seek unity,” he said.

Throughout 45 minutes, he threw out his government plans, and although he sounded conciliatory, he attacked the “mafia of power” and the groups that, he assures, put the “government at the service of a minority.”

He also affirmed that Mexico will not be a “piñata” of any country, in reference to the complex bilateral relationship with the United States since Donald Trump arrived at the White House.

The event was an authentic party, as if I had already won. The same name of the event presaged it, the “AMLOfest”.

“I’m not going to fail you, I’m a man of convictions and principles,” he said, yelling “president” from the stands.

From hours before their arrival, the Azteca Stadium and its surroundings were a hotbed of militants and supporters arriving from different parts of the country.

“It is an honor to be with Obrador!”, They sang in this magnificent venue owned by Televisa that López Obrador rented for the occasion, and which has hosted two football World Cups and concerts by artists like Michael Jackson.

But today the star was he, accompanied by several singers of the caliber of Belinda or Margarita the goddess of the cumbia that entertained the evening previously.

Many, many T-shirts and clothes worn by people of all ages and with the slogan of “Morena, the hope of Mexico” attested to this, adding to banners and screens with the image of the leftist leader.

But beyond the overwhelmed political propaganda that has accompanied this long election campaign of almost three months, the atmosphere breathed an emblem that transcended the party.

It was the illusion of a true change in a country for many burning after the wave of violence and corruption that have marked the mandate of Enrique Peña Nieto (2012-2018).

“I believe by political conviction in the movement and in its honesty,” Dayana de Sousa, a capitalist who wore a nice sticker with a drawing of the leftist leader, told Efe.

Dayana defined herself as a convinced “AMLOver”, who will vote for the leader of Morena for the third time in a presidential election, as she did in 2006 and 2012.

He clarified that he is not part of Morena, but he is “a Mexico of people who want a change”.

Nor is he afraid of electoral fraud, to which López Obrador attributes his previous defeats, because “people are fed up with the Institutional Revolutionary Party (PRI), the National Action Party (PAN) and corruption.”

For David Irigoyen, López Obrador is the “only alternative” for the country.

“All these people are unfortunately corrupt, for me,” he told Efe about the other presidential hopefuls, José Antonio Meade of the ruling PRI, Ricardo Anaya of the conservative PAN and the independent Jaime Rodríguez.

At 23, the university student Estefanía Cruz came to the stadium to live a historic moment.

“We want a change, we all know that the PRI governed a long time, and two sexennia was the PAN, and what we saw was a general backwardness,” said this young woman who will vote for the first time in presidential elections.

And she was confident in the results according to some polls that place Lopez Obrador with a comfortable advantage.

With the same enthusiasm, but several decades behind him, Francisco Muñoz visited the Azteca with the word “change” in his mouth.

At 72 years old and wearing the jersey of the Mexican National Soccer Team, which today went into the Round of 16 round at the 2018 World Cup in Russia, he considered that the leader of Morena is the only one who can restore tranquility to the Mexican people.

And, how could it be otherwise, compared the country, the political leader and the national team.

“The national team is demonstrating that we want change, they are a new generation of young people who are fighting for a new Mexico,” he said.

But if the simile with the football repeats itself, a somewhat tortuous path awaits Lopez Obrador to channel the country.

Because today Mexico lost 0-3 against Sweden, but managed to qualify for points after winning the first two games and thanks to the defeat of Germany against South Korea.

A carom of events that barely contemplated the betting houses.