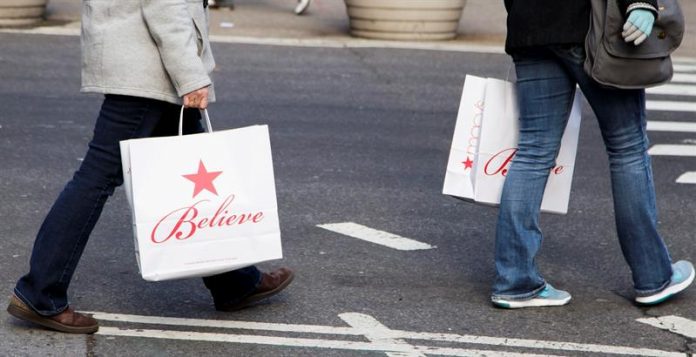 The growth rate of the national economy moderated in the first quarter of 2018, to an annual rate of 2%, with a slowdown in consumer spending leveled by the solid investment of the companies.

The figure also surprised analysts, who calculated a growth rate of 2.3% per year, slightly higher than the May calculation.

The Commerce Department published the last of its three calculations on the evolution of gross domestic product (GDP) between January and March in the United States.

Commerce attributed the slowdown in GDP to the fall in consumption, exports, spending at the state and local levels, and spending by the federal government, in addition to the decline registered in fixed residential investment.

In fact, consumer spending, which represents almost two thirds of the country’s economic activity, was revised downwards from 1% to 0.9%, following the rise of 4.4% in the previous quarter.

This was the slowest pace of consumer spending since the second quarter of 2013 and reflected the downward revisions of health spending by nonprofit organizations and disbursements in financial and insurance services, according to the report. .

The business investment registered, however, a rebound, with an increase in the purchase of capital goods of 5.8% instead of 5.5% previously calculated, which reflects an optimism of the companies in the economic future.

The third quarterly calculation is far from the promise of President Donald Trump to bring economic growth at an annual rate of 3%, driven by a huge fiscal stimulus plan that includes notable tax cuts for companies and, to a lesser extent, the workers.

Until now, this measure, which Trump has been looking for, is not having the expected results in the most important macroeconomic indicator in the US.

Despite this slowdown, the economy continues to show good health, with an unemployment rate that ended May at 3.8%, at levels considered full employment and not seen since 2000.

As a result, the Federal Reserve (Fed) has strengthened its commitment to carry out a gradual monetary adjustment.

Two weeks ago, the US Central Bank raised interest rates to the current range of between 1.75% and 2%, which was the second rise in the price of money so far in 2018, and is expected to carry out at least two other increases.

On the other hand, the Fed improved the forecasts of economic growth to 2.8% for this year, compared to the 2.7% calculated in March, and the inflation to 2.1%, above the 1.9% of three months ago.

At its spring meeting, held in Washington in April, the International Monetary Fund (IMF) raised the growth forecasts for the US economy to 2.9% for this year, a figure that is still far from being met.

The concern is now in US commercial relations. with different regions of the world, such as China, a country with which it has exchanged various tariff measures since Trump opted for an aggressive protectionist policy in March.

The US executive has also created friction with long-standing trading partners such as Mexico, Canada and the European Union (EU), which lifted the exemption from the controversial tariffs on steel and aluminum earlier this month.

The figures of the trade balance, for now, have not yet shown signs of being affected and the trade deficit of goods and services fell by 2.1% in April and was in a total balance of 46.2 billion dollars, the lowest figure in seven months.

The reaction of Wall Street to the data of the US economy It was mixed and the Dow Jones Industrial, its main indicator, gave 0.12% minutes after the start of the session, while the selective S & P 500 advanced 0.05% and the composite index Nasdaq market cut a 0, eleven %.