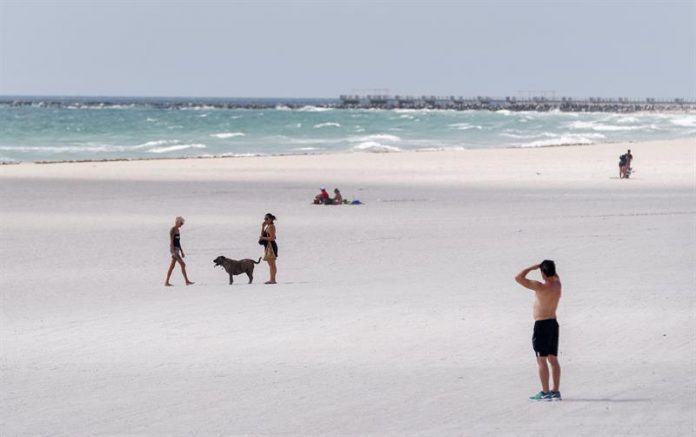 The Cayos, the touristy island rosary located between the Florida peninsula and Cuba, the US area most affected by Hurricane Irma, are ready to receive tourists again from October 1.

When more than two weeks have passed since Irma landed in the category 4 Keys, George Neugent, mayor of Monroe County, to which these islands belong, reported today that the tourist season interrupted by the cyclone will resume on 1 October.

“We know we have a long way to go before the Keys fully recover,” the mayor of Monroe said, according to South Florida media.

Neugent recalled that tourism is the main industry of the Keys and that many of its inhabitants live on it, so it is necessary “to start asking tourists to return.”

The arrival to Key West of the first cruise after Irma, the Royal Caribbean company’s “Empress of the Sea”, was the herald of today’s announcement by Neugent.

Key West Mayor Craig Cates greeted the cruisers who landed at the foot of the catwalk to thank them for their visit.

A dozen people died in the region as a result of Hurricane Irma, which landed in the Keys on September 10, and it is estimated that 25% of the buildings in the Keys were destroyed by Irma, according to newspaper reports.

Access to the Keys was closed for almost ten days due to the ravages caused by Irma, and until September 19 the roads were not opened to traffic, although “only for residents, business owners” and those who provided assistance in missions of aid to the victims.

The International Airport of Key West returned to operation day 20, also with limitations.

The Keys “are not ready for tourism yet, if it does not have to be here, do not come,” said Monroe County Administrator Roman Gastesi.

On the website of the agency that provides information on the Keys, the authorities published a statement today in which they detail the situation and give advice to potential visitors.

Almost everywhere, from Key Largo to Marathon, as well as Stock Island and Key West, light and water service has been restored, cell phone is working fine, but cable television has not yet been restored and internet, they point out.

Motorists advise caution and move away from places where cleaning and repair work is still done.

In all the Keys there are mountains of debris that must be removed.

Although some of the events for the high season of the Cayos, which is the fall and winter of the northern hemisphere, have been postponed, there are others that hold their dates, such as the Humphrey Bogart Film Festival, the Crab Food Contest and the Fantasy Festival of Key West.