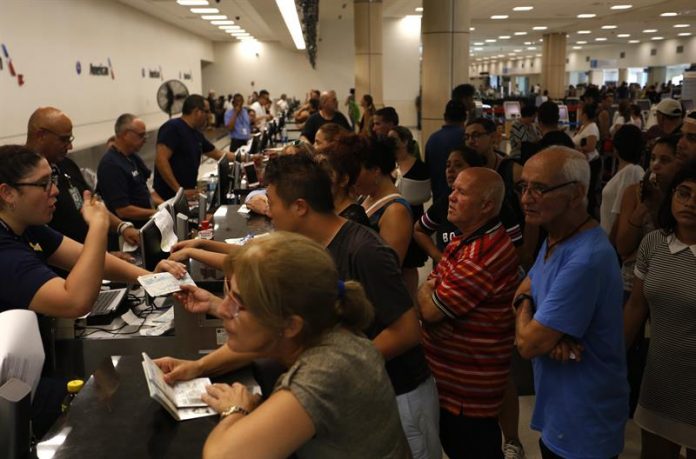 Puerto Ricans arrived in Miami on one of the first flights that left the island after Hurricane Maria to calm the lack of electricity, air conditioning and communications and even medical treatments.

One of the travelers, lawyer Diego Figueroa, told Efe that Luis Muñoz Marín International Airport in San Juan is “crazy” because “everything is manual”, even the American Airlines passage was “written on a paper with pen”.

Figueroa was one of the lucky ones who could leave the terminal, which has limited flights for now and hundreds of people staying there in the face of delays to leave for the United States.

The flight, which came “full”, was the escape to escape the “chaos” that the island is experiencing, which is already beginning to present looting and violence from desperate people making food, gasoline and money withdrawals , lamented the Cuban Martha Barquet.

Barquet, who has resided since childhood on Charm Island, said she will spend some time in her Florida home because she can not be without refrigeration because of her condition of multiple sclerosis.

He regretted that other patients with their condition were forced to use ice cubes to withstand the heat because the island is practically without electricity and without gas after the passage of Hurricane Maria.

“There are many people who are very bad,” said Barquet in tears.

The cyclone, which touched down last Wednesday as Category 4 after wreaking havoc in the Caribbean, especially in Dominica and the Virgin Islands, has killed at least 16 people.

For her part, Roxana Cortijo, another of the passengers, was “rescued” by her sister who lives in Texas, who went to the island and brought her to the United States for dialysis.

The patient indicated that the medical services are working with overload and that she has not been able to perform the weekly dialysis required because some machines were damaged and also Puerto Rico has received patients from the Virgin Islands, who were also affected by Maria.

In Puerto Rico, the academic sector is also virtually paralyzed.

Luis Zayas, Vice President of National Affairs of the University System Ana G. Méndez, who also arrived on the flight today, told Efe that he would try to support from Miami the communications of the school and “explore ways to make the internet work” .

He stated that all students of the school in Puerto Rico are without classes until the welfare of teaching staff and other employees is guaranteed and normalcy is restored on the island.

For his part, the Venezuelan Miguel Angel Gil said that “the electrical problem is very serious” and that is why he came with his wife, who studies in the island to spend time in Florida with relatives while guaranteeing public services in Puerto Rich.

The governor of the island, Ricardo Rosselló, warned today that the island is near a humanitarian crisis and asked the federal government for more resources to face the devastation caused by Maria.

“We are going to stay here while the light and water comes to Puerto Rico,” said Ginny Belabal, who came with her husband.

The passenger said that in Rio Grande, on the northeast coast of the island, where they live, “there is no water, electricity and food is very small.

In addition, the airport from where they left, in San Juan, where only about a dozen daily flights from the nearly one hundred are frequent, have a long-range satellite fault that provides information to the control tower, which also makes operations difficult. EFEUSA