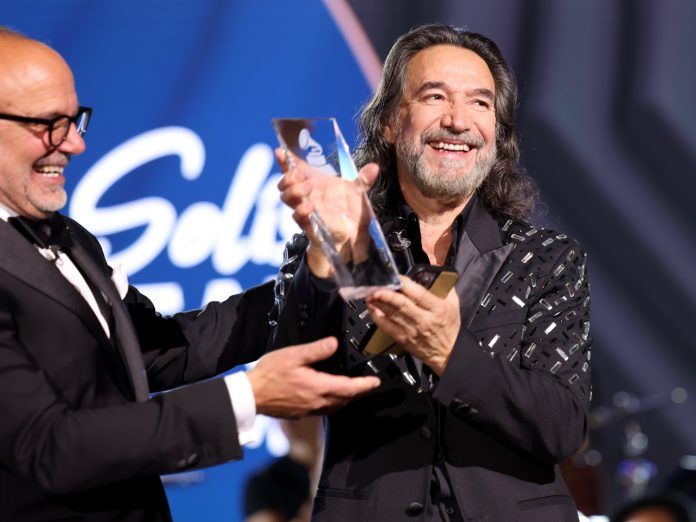 The Mexican singer-songwriter Marco Antonio Solís received the distinction of Person of the Year 2022 from the Latin Grammy, in a special ceremony that included a musical tribute from colleagues such as Camila, Sebastián Yatra, Laura Pausini and Christian Nodal, among others.
“Everything I write I do by inspiration. I am not a song builder; I am a composer who gets carried away by what comes to his heart and mind at any time. This requires a lot of honesty, and honesty connects with souls and hearts, ”El Buki wrote on his social networks about his recognition.
The Los Bukis vocalist was honored with this distinction as part of an evening at the Mandalay Bay Convention Center in this city, which featured a red carpet and a showcase to honor one of Mexico’s most prolific singer-songwriters.
Solís opened the concert, unlike other years when the honoree closes the show, with a medley made up of “Where are we going to stop”, “La venia bendita” and “Tú cárcel”; later the special guests also did the same.
Laura Pausini sang “Sigue sin mí”, while Colombian Sebastián Yatra sang “Either I’m going or you’re going”; The evening continued with “My eternal secret love” in the voice of the Mexican Christian Nodal, while Grupo Bronco did a duet with Elsa and Elmar with “You drive me crazy”, “How I went to fall in love with you” sounded in the voices of Jesse & Joy with Eden Muñoz.
In an unusual gathering, Gente de Zona joined Taboo, a member of the Black Eyes Peas, to sing “More than your friend”; Romeo Santos received the applause with “Invéntame” and Fito Paez, inseparable from his piano, gave voice to “De mil amores”; Camila and Sin Bandera, two of the most important pop duets in Latin music, sang “Where will my spring be” and Marla Solís, Buki’s daughter, closed with “When you remember me”.
In addition, the Argentine Amanda Miguel received the special Grammy for Musical Excellence in an act in which she was accompanied by her daughter Ana Victoria, and took the opportunity to remember her life partner Diego Verdaguer, almost a year after his death in cause of Coivd-19.
The awards ceremony was held on an evening prior to the 2022 Latin Grammy Awards that take place this Thursday night.