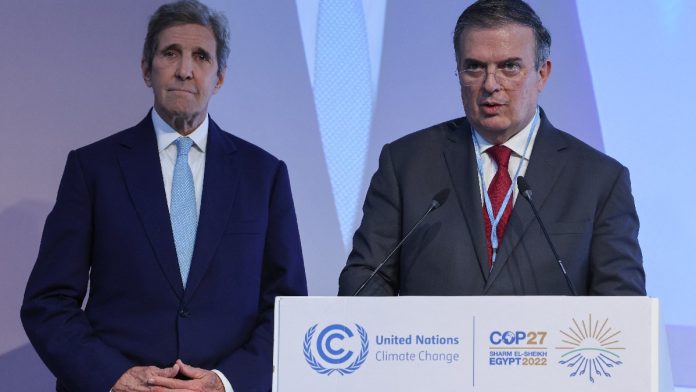 Within the framework of his participation in COP 27 in Egypt, Foreign Minister Marcelo Ebrard, accompanied by the US Special Envoy for Climate, John Kerry, presented Mexico’s commitments to address climate change in the coming years
Before the COP 27 forum, the official promised that our country will reduce its greenhouse gas emissions between 22% and 35% in the next 8 years.
He added that this decision is part of a joint renewable energy project with the United States and that it represents an investment of 48,000 million dollars.
During his participation in COP 27, the 27th UN climate summit that is being held these days in Sharm El-Sheikh, Egypt, Ebrard was accompanied by the United States Special Envoy for Climate, John Kerry.
Ebrard also promised that Mexico will seek to reduce emissions by 52 million tons of carbon and generate twice the current emission of clean energy by 2030: 40 GW (Gigawatts) more.
The head of Foreign Relations also called on developed countries to comply with the commitment embodied in the Paris Agreements to establish a climate action fund with 100,000 million dollars, which remains unfulfilled.
This Tuesday the G20 Leaders Summit will begin in Nusa Dua, Bali. On behalf of President Andrés Manuel López Obrador, the foreign minister will convey Mexico’s message to the G20 Heads of State and Government, seeking the adoption of specific commitments to coordinate a global response to face the present challenges.
Subsequently, Ebrard will attend Bali, in Indonesia, to represent the country at the G20 Leaders Summit on November 14, 15 and 16.
Regarding the conflict in Ukraine, and in the same vein as the present leaders, Secretary Ebrard reiterated the need to adopt an approach based on peace and a diplomatic solution to conflicts and crises that impact the international community.
“The negotiation process for the Declaration to be adopted at this year’s Summit will take place in an unprecedented context due to the geopolitical situation in Eastern Europe due to the Russian invasion of Ukraine and its impact on food and energy security. ”, pointed out the SRE.
At this meeting, Ebrard will meet with his counterparts from Argentina, Canada, Spain and the United States, as well as the director general of the World Health Organization (WHO), Tedros Adhanom Ghebreyesus, and the executive president of the World Economic Forum, Klaus Schwab, among others.
On November 17 and 18, the Mexican Foreign Minister will travel to Ankara, Turkey, within the framework of the second meeting of the Mexico-Turkey High Level Commission and a series of meetings with businessmen and the Mexican community in that area of ​​the Middle East. .
This visit “means the continuation of the high-level political dialogue between our country, middle powers with regional weight and influence, as well as continuing to support the Turkish presidency of Mikta,” the bulletin detailed, referring to the bloc made up of Mexico, Indonesia, South Korea South, Turkey and Australia.
“These goals will allow the North American region to have one of the most efficient energy transitions […] President López Obrador’s decision will mean thousands of new jobs and the expansion of Mexico’s green economy” Marcelo Ebrard