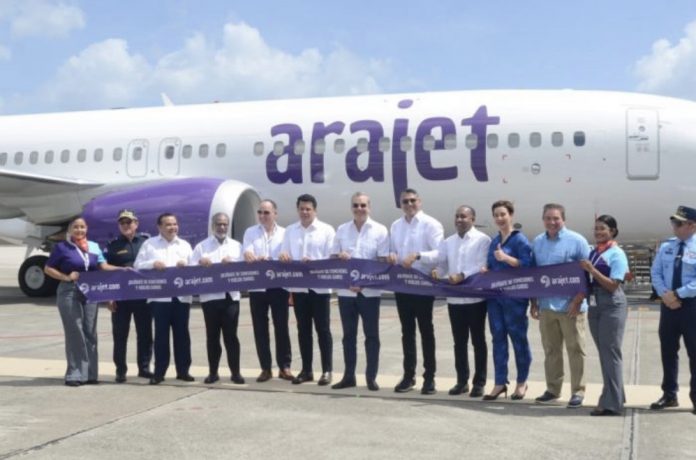 The formal start of operations of Arajet, the new low-cost airline that will connect the Dominican Republic with 22 destinations in 12 countries, will have an immediate impact on the growth of tourism, the strengthening of commercial aviation and its contribution to the national economy

This was announced by the interim general director of the Dominican Institute of Civil Aviation (IDAC) Héctor Porcella, after participating in the official inauguration of the first Arajet flight to the city of San Salvador, capital of El Salvador, with the presence of President Luis Abinader, the Minister of Tourism David Collado and the main authorities of the Dominican aeronautical sector.

After the symbolic cutting of the ribbon, held at the José Francisco Peña Gómez Las Américas International Airport, President Abinader expressed his congratulations to the Arajet line, assuring that the launch of its operations will be of benefit to all Dominicans.

He stated that from the Government, the responsible authorities will be giving all the necessary support so that the Dominican aeronautical industry can be as competitive as possible, and can move towards the creation of an air hub that promotes tourism, trade and cultural exchange, and give Dominicans the opportunity to travel at reasonable prices.

While Pacheco Méndez highlighted that the low-cost business model and the status of national airline will attract more tourists, increase connectivity and offer Dominicans the opportunity to travel with lower fares, aboard new aircraft with the highest standards. of security, and our distinctive and warm Dominican customer service.

Minister David Collado also referred to the impact of the new airline on tourism, stating that it will contribute to the growth of the industry, attracting more visitors, especially from destinations with which the country had no direct connection until now, “which It will drive us to continue reaching record numbers in tourist arrivals, and also diversifying the nationality of our visitors with fair rates to connect Santo Domingo with the continent.”

Also present at the event, representing the official aeronautical sector, were the president of the Civil Aviation Board, José Marte Piantini, and the director of the Airport Department, Víctor Pichardo.