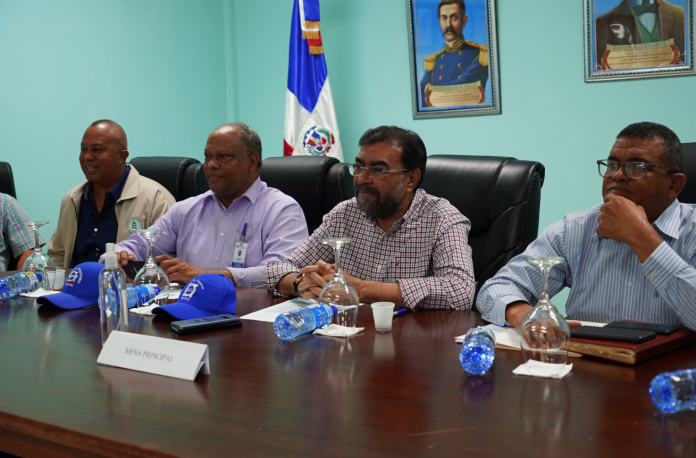 Olmedo Caba Romano, executive director of the National Institute of Hydraulic Resources (INDRHI), met with directors of the Irrigation Boards that work hand in hand with the Alto Yaque del Norte and Bajo Yaque del Norte regional directorates, in which he offered details on repairing a section of the Monseiur Bogaert canal in Los Almácigos, analyzed proposals to save production in the area and discussed the requirements of producers to coordinate work in the demarcation.

Prior to the meeting, he supervised the repair of the Ms Bogaert canal at the point of rupture, where the pouring of reinforced concrete began this weekend. He explained that the transition operations consisted of rebuilding the flumen outlet and lining the section with reinforced concrete, and that they worked double shifts to put it into operation this week, rehabilitating irrigation in 120,000 tasks and supplying four aqueducts.

He also inspected the 300-meter cache lining of the Mao-Gurabo canal, a conduit work that irrigates 145,000 tasks, and where the Ministry of Public Works is currently building a bridge as it passes through the community.

Caba Romano announced that they will definitively rehabilitate a section of the Guayacanes canal, in the Esperanza municipality, where through a quick intervention the institution placed a 46-inch pipe as a provisional measure to rehabilitate the subsequent irrigation of its breakage last December. He indicated that in the canal, which has been built for more than 50 years, they will build a sewer box that will allow the producers to cross, they will rebuild the flumen and carry out other renovations in the area, whose works are being tendered.

The meeting took place at the Mao Irrigation Board premises, and was attended by the directors of the other Boards, such as Ulises Francisco’s son. Espaillat, Ms. Bogaert, Fernando Valerio, Horacio Vásquez and Dajabón, who exposed the need for heavy equipment for cleaning the different irrigation systems. Caba Romano reported that as soon as the work on the Ms. Bogaert channel is completed, these teams will be rotated to provide the required maintenance.

The president of the Irrigation Board of Mao, Luis Alexander Tineo, seconded Caba Romano’s approach to joint aid and asked those present to consider as a priority the emergency situation suffered by the Ms. Bogaert Irrigation Board due to the breakage and exit of operation of a section of the canal, for which he asked to support it as much as possible.

From INDRHI were also Luis Cuevas, in charge of the Irrigation Systems division; Juanito Montilla, in charge of Irrigation User Services, and Víctor de Oleo, in charge of the Executing Unit of the Resilient Agriculture and Integrated Management of Water Resources Project (PARGIRH). Also present was the presence of the deputy Marta de Jesús Collado Osoria de López.

Improvements in hydraulic works of Yaque del Norte
It is worth mentioning that INDRHI, together with the Ministries of Economy, Planning and Development (MEPyD), Environment and Natural Resources and Agriculture, the Water Cabinet, in addition to the National Institute of Drinking Water and Sewage (INAPA), will develop the PARGIRH project, which contemplates, by the hydraulic institute, the rehabilitation of irrigation and water storage structures in the demarcation, with financing from the World Bank.

Among the infrastructures to intervene is the Ms. Bogaert canal, 37 kilometers long on land, which supplies more than 200,000 tasks that are grown mostly rice and bananas for export. The repair work for breaking its structure is frequent because it is a work built almost 100 years ago. Other canals contemplated for rehabilitation are the Luis Bogart in Mao and the Mao – Gurabo.