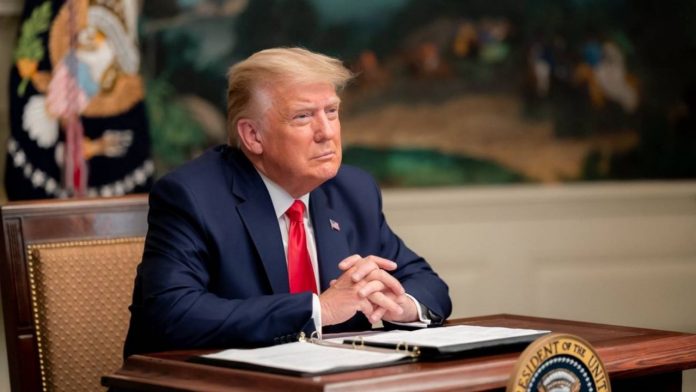 The Judicial Committee of the United States Senate has presented this Thursday a new report detailing the pressure exerted on the Justice Department by former President Donald Trump to annul the results of the November 2020 presidential elections.

The 400-page report, based on the statements of three former senior Justice Department officials, details how former President Trump intended to replace Acting Attorney General Jeffrey Rosen with his henchman Jeffrey Clark, with whom he had devised a strategy to intervene. in the results of the state of Georgia.

However, the idea was rejected by top officials in this office, as well as by White House lawyers, who let Donald Trump know in January that they would resign en bloc if he went ahead with his attempt to replace Rosen.

“One thing we know is that you, Rosen, are not going to do anything to reverse the outcome of the elections,” says the then acting attorney general, who was snapped at by former President Trump during a meeting with other senior officials held on 3 May. January in the Oval Office.

At that meeting, the report points out, the former assistant attorney general, Richard Donoghue, was also present, who assures that throughout the meeting, Trump insisted on placing Clark at the head of the Justice Department.

So much so that Donoghue and the then assistant attorney general, Steven Engel, let him know that if he continued down that path, all of Rosen’s assistants and collaborators would resign.

“Donoghue added that these resignations probably would not end there, and that other US prosecutors and various Justice Department officials could also present their resignations,” reads the report, referred to by NBC.

This initiative to resign en bloc was not only seconded by the workers of the Department of Justice, but also by the main lawyers of the White House, Pat Cipollone, who described these pretensions of Trump as a “suicide”, and Patrick Philbin. Both assured that they would also leave their posts.

Once the meeting was over, and according to this report, Donoghue says that Trump continued trying to carry out his plan and that he called him to assure him that “a special agent from the Department of Security was guarding a van full of destroyed ballots on the outskirts of Atlanta.” a statement that later that same office, the FBI and the Attorney General’s Office, determined was false.

Three days later, Trump held a rally outside the White House where he insisted on these unfounded theories of electoral fraud and defended the need to interrupt the counting of electoral votes that was taking place at that time in a Capitol, which hours later it was razed by its mob of stalwarts, leaving several dead on the way.

This is the second, and most detailed, report that the United States Congress publishes on what happened in the days before the assault on the Capitol on January 6, after the one launched in June by the House Oversight Committee, which It has also formed a special commission to investigate and clarify responsibilities for what happened.