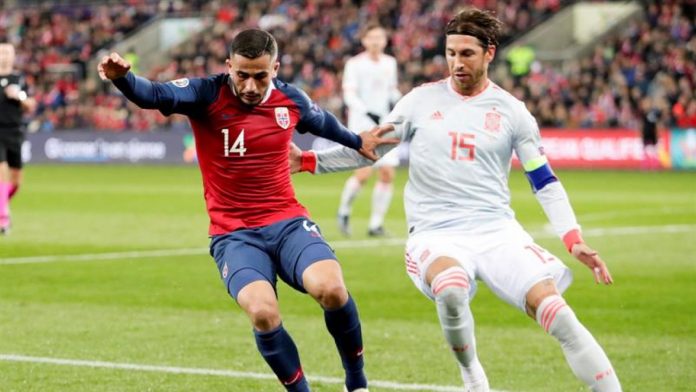 The captain of the Spanish team, Sergio Ramos, has become the European player with the most caps in history this Saturday after beating Italian goalkeeper Gianluigi Buffon thanks to his ownership in the match against Switzerland, of the League of Nations, which It is number 177 with ‘la Roja’ for the Andalusian central defender.

Ramos, 34, has also equaled the Mexican Claudio Suárez, already retired, and is seven games behind the also retired Ahmed Hassan, an Egyptian midfielder who played 184 games with his team and leads the ranking of most caps, according to published data by FIFA.

In between are Ahmed Mubarak (179) and Bader Al-Mutawa (178). Both the Omani midfielder and the Kuwait forward are still active and could overtake the Egyptian. Both are 35 years old and last year they played 16 and 12 international matches, respectively.

Ramos is 177 behind the two in the latter window and hopes to add a third on Tuesday against Germany. The five minutes played in Amsterdam, in the friendly against the Netherlands, allowed him to continue increasing this account. Only in 9 games of the total has he played less than half an hour, a figure that shows his relevance with any coach.

The one from Beds surpassed the European record after having equaled Gianluigi Buffon last Wednesday. With the match against Switzerland, Sergio Ramos is already the player – born in the ‘Old Continent’ – with the most appearances for his team.

The list of more caps is headed by the Egyptian Ahmed Hassan, former of Sunderland and Anderlecht, among other clubs, who played 184 games with ‘the pharaohs’ and also with a very successful career, winning four African Cups (1998, 2006, 2008 and 2010).

In this list, within the ‘top ten’ there is only one other active player who could threaten Ramos’ record: his former Real Madrid teammate, the Portuguese Cristiano Ronaldo, who has a total of 169 international matches with the ‘tugas’. The next Spaniard in this ranking is Iker Casillas, the tenth, with 167 matches for Spain in his career.

Ramos made his international debut in 2005, before the World Cup in Germany, under the guidance of coach Luis Aragonés, and a decade later, after winning the European Championship in Ukraine and Poland, he began to wear the captain’s armband. He has started with all the national coaches: Luis Aragonés, Vicente Del Bosque, Julen Lopetegui, Fernando Hierro, Robert Moreno and Luis Enrique.