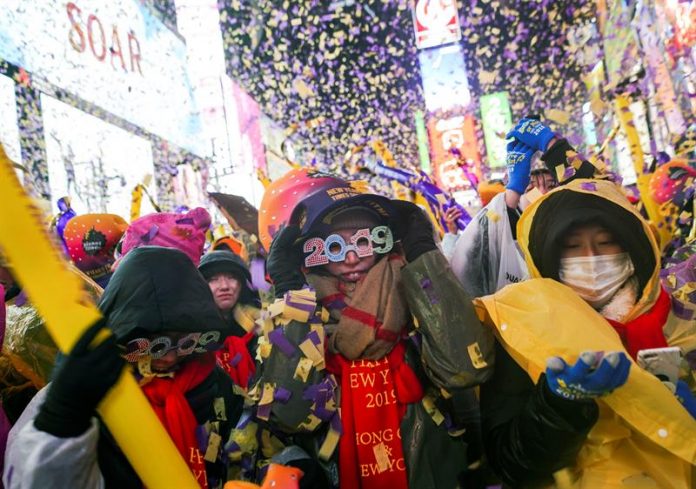 Thousands of people said goodbye today in the rain of 2018 and welcomed 2019 in the emblematic square of Times Square in New York, accompanied by a colorful cloud of confetti and the descent of the iconic crystal ball of more than 5 tons.

The ball, more than three and a half meters in diameter slid during the last sixty seconds of 2018 between the jubilation, the shout and the applause of those present, after which the “New York, New York” of Frank Sinatra resounded.

Up to a million people, according to the organizers, gathered to celebrate the arrival of the year in a final climax of confetti, lights and fireworks, after witnessing a six-hour dance and music show during which a fine and persistent protagonist was present. rain.

As is traditional, part of the confetti used, registered the wishes that many visitors from Times Square wrote during the last days of the year, some of which were read by several celebrities, such as American comedian Steve Harvey.

Dressed in hats and purple and yellow balloons and red scarves distributed by the organizers, many participants welcomed 2019 as tradition marks: with the “midnight kiss”, a ritual that, according to the superstitious, avoids 365 days of solitude.

The Times Square ball, which weighs 5,386 kilograms, is made up of 2,688 crystal triangles. This year, 192 new “brilliant crystals” have been installed as part of a design called “harmony gift” with which the organizers want to make an appeal “to agreement and compatibility”.

From before noon and between strong security measures, participants gathered to celebrate the event, which was not allowed to enter with backpacks, large bags or umbrellas.

The long wait of the attendees, who did not have public restrooms -some are accustomed to go with diapers-, was enlivened by the performances of Paulina Rubio, Sting, Christina Aguilera, New Kids on The Block or Snoop Dogg as well as the intervention of celebrities and television presenters like model Jenny McCarthy.

The evening, which began at 6:00 pm local time (23:00 GMT), also had a solidarity component in defense of journalism and freedom of opinion, with the participation of the NGO Committee for the Protection of Journalists (CPJ, according to its acronym in English ).

Like other years, the Latin music also had presence in the festive evening through the Venezuelan interpreters Mau and Ricky Montaner and the Argentine singer Lali Esposito.

But New York singer Bebe Rexha was responsible for interpreting minutes before midnight, the traditional peace hymn “Imagine” composed by John Lennon, prior to the descent of the luminous glass sphere.

This year, along with the mayor of New York, Bill de Blasio, 11 journalists have appeared as “Special Guests” to press the button that will lower the sphere just one minute before midnight that slipped 21 meters for 60 seconds illuminated by 32,256 LED bulbs.

Together with the mayor and his wife, the director of the Committee to Protect Journalists, Joel Simon, was in charge of setting up the mechanism.

With them were also Martha Raddatz of the ABC network or Karen Attiah, editor in the Wasington Post of the Saudi journalist Yamal Khashoggi killed by Saudi agents in Turkey.

Since 1996, all the mayors of the city have had the privilege of pressing the button next to celebrities and public figures who are chosen for their contribution or importance within a given community.

Among the guests in previous years are Tarana Burke, founder of the MeToo movement against sexual harassment, Bill and Hillary Clinton, Muhammad Ali and Lady Gaga.

The celebrations were accompanied by strict security measures, with records at all entry points and special anti-terrorist forces deployed in the surrounding streets, where they began to restrict the passage of pedestrians and traffic from 4.00 a.m. local time.

The massive end of the year party in Times Square is world famous and, despite the cold, many people around the world travel to New York specifically to witness the event.

The festivities in that square have been held for 112 years, while the decline of the sphere, which has become an icon, has been taking place since 1907.

They were the owners of the newspaper The New York Times, which in 1904 began to celebrate the year’s entrance on the roof of their building, located in Times Square, who in 1907 began to use an illuminated sphere to mark the change of year.