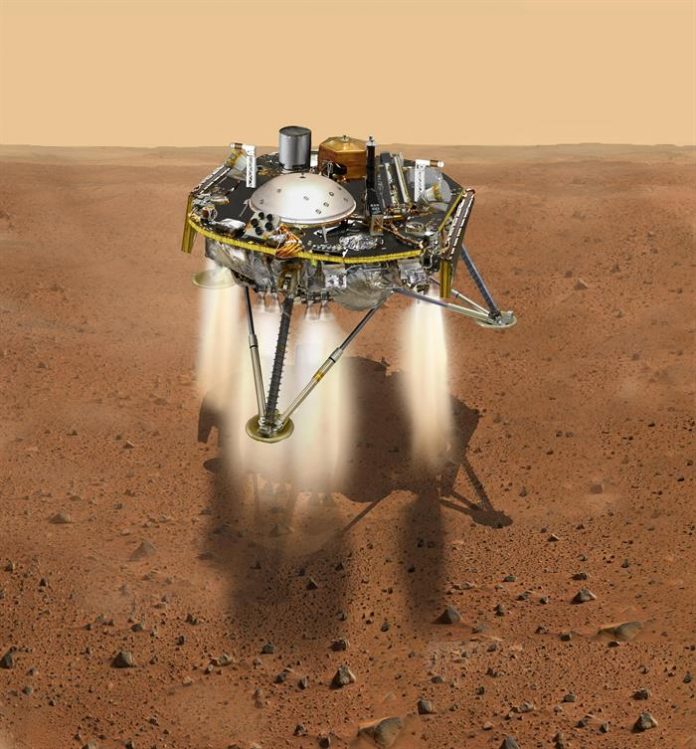 “To know the heart” of Mars is the main objective of the InSight module, the first NASA mission that wants to study specifically the interior and composition of the red planet, which landed successfully today on the Martian surface.

“I feel you, Mars, and soon I will know your heart, with this safe landing, I am here, I am at home,” he said today on Twitter, with a romanticism not typical of the most advanced technology, the InSight module, which has been broadcasting live and in this social network your adventure through space.

After a long wait to bite their nails and look blinking at the screens of the control room, the technicians and scientists of the NASA Propulsion Laboratory in Pasadena (California) received today with great joy at 11.53 local time the signal that InSight had landed on Mars as planned.

The collective hugs and the applause without stop took then the protagonism of a room in which the personnel of the NASA, following a singular superstition, ate peanuts to support better the anteroom of the landing and to wish the best luck to InSight.

NASA Administrator, Jim Bridenstine, noted with great satisfaction that it is “an incredible day” for the agency and also recognized the contribution of international partners in this mission.

“And what is fascinating is that, as you look at it, you think, ‘Every achievement is something that has happened eight minutes before (so it takes a Mars signal to travel to Earth)’. So it’s exciting but you also have to take a step back and realize that what you see has already happened, it’s a unique, incredible experience, “he said.

In the previous days, NASA experts constantly talked about the “seven minutes of terror”, the delicate and very brief phase in which the module had to go through the Martian atmosphere at almost 20,000 kilometers per hour to reduce its speed sharply up to about five kilometers just before landing.

InSight not only exceeded with note its landing, which involved a combined parachute and “retro-rocket” process, but almost immediately sent its first photograph from Mars, which arrived at NASA’s control room at 11.58 local time.

Faced with previous missions to the red planet, which had focused on studying its surface or its atmosphere, the great novelty and particularity of InSight is that its main purpose is to study the interior of Mars: its insides and its composition.

Scientists believe that finding out more about the interior of Mars will help to know more about its formation 4,500 million years ago as well as to expand the knowledge of the other three inner planets of the Solar System (Mercury, Venus and Earth).

To reach “the heart” of Mars, InSight has, among other instruments, a seismograph and a probe that will measure the internal activity and temperature of the planet, respectively.

In this aspect, the work of a mechanical excavator that will drill up to about five meters deep on the Martian surface will be crucial.
InSight has landed today on a flat area of ​​Mars known as Elysium Planitia, an area considered by experts as relatively safe for an uneventful landing.

Unlike other NASA missions carried out by robots that were traveling on Mars, InSight has settled definitively today and will carry out its investigative work without moving.

InSight took off last May 5 from the Vandenberg Air Base in California and has traveled 485 million kilometers between Earth and Mars.
It is planned that the scientific mission of InSight will last around two years.
Vice President Mike Pence today congratulated NASA and all those who contributed to the arrival of InSight on the Martian surface.

“This is the eighth time that the US lands on Mars and the first time to study its interior, an incredible milestone!” Said Pence on Twitter.
Numerous enthusiasts of space exploration gathered today to follow the final stage of InSight’s journey in different parts of the world, from Times Square in New York to the City of Sciences and Industry in Paris. (EFEUSA)