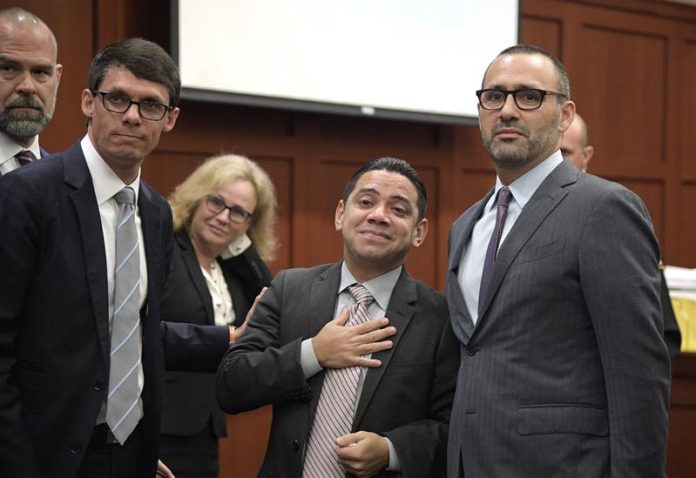 Clemente Javier Aguirre, a Honduran who was sentenced to death for the stabbing murders of two of his neighbors in 2004 in Florida, was exonerated today from all charges against him, said an organization that investigates judicial errors in criminal cases.

At a hearing held today in Seminole County, in northern Florida, Judge John D. Galluzo dismissed all charges against Aguirre, 38, “after the prosecution announced that it was withdrawing the charges, when they were in the middle of the selection of the jury “for a new trial.

“After more than 14 years behind bars, including a decade on the death row in Florida, Aguirre was exonerated of all charges for the deaths of his neighbors Cheryl Williams and Carole Bareis,” the lawyers’ group said in a statement. non-profit Innocence Project.

Aguirre, who was born in Honduras in 1980 and came to the United States irregularly in 2003, was sentenced to death in 2006 and had appealed numerous times before the courts, which did not agree with him even after new evidence emerged that pointed to a relative of the victims as possible author of the murders.

But in October 2016, the Supreme Court of Florida annulled the death sentence imposed on the Honduran and ordered that a new trial be held.

The Supreme Court of Florida “unanimously annulled” the sentence and death sentence against Aguirre before the “new evidence of innocence that his original jury never heard,” said Innocence Project.

The “new evidence included DNA evidence from multiple parts of the crime scene that exonerated Aguirre and implicated another suspect: the daughter and granddaughter of the victims, Samantha Williams,” he said.

In the years after Aguirre’s trial and death sentence, “Samantha Williams confessed to many friends and acquaintances” that she was the one who committed the double homicide.

In spite of everything, the public prosecutor Phil Archer had assured that the state thought to ask for the second time that was sentenced to death to Aguirre.

“Today’s decision by prosecutors not to proceed (against Aguirre) came after an additional test undermined Williams’ alibi and implicated her even more” in the murders, the organization added.

The Innocence Project organization began to work in the case of Aguirre in 2011, when the Capital Collateral Regional Counsel group, made up of public defenders representing those condemned to the death penalty, requested help in the search for DNA in more cases. of 48 pieces not tested previously.

“The result (of these analyzes) excluded Aguirre unequivocally,” the statement said.

In the appeal before the Supreme Court, the lawyers had pointed out that the author of the double crime was not Aguirre but Samantha Lee Williams, who lived with her mother and grandmother in a trailer house, although she denied this point.

The experts came to identify the girl’s DNA in eight blood samples found in the trailer.

The woman told the Seminole County Police that on the evening of the double murder she had had an argument with her mother and that she had spent that night with her boyfriend and said that when she left them they were alive.

At a hearing in 2013, Lee Williams acknowledged that he sometimes suffered fits of rage and admitted that he had once broken the windows of the motor home.

Aguirre told the detectives that he was touring the area when he discovered at dawn on June 17, 2004, the bloody bodies of his neighbors.

When they tried to find out if they were still alive, they were stained with the blood of the victims and then they left the place.

The prosecution said at the trial that the knife used to kill the women was found in Aguirre’s yard and the clothes he wore stained with blood were located in a plastic bag in a nearby shed.

Aguirre pleaded not guilty in the trial in which he was sentenced to two maximum penalties in 2006. The jury then recommended his death sentence with seven votes in favor and five against.