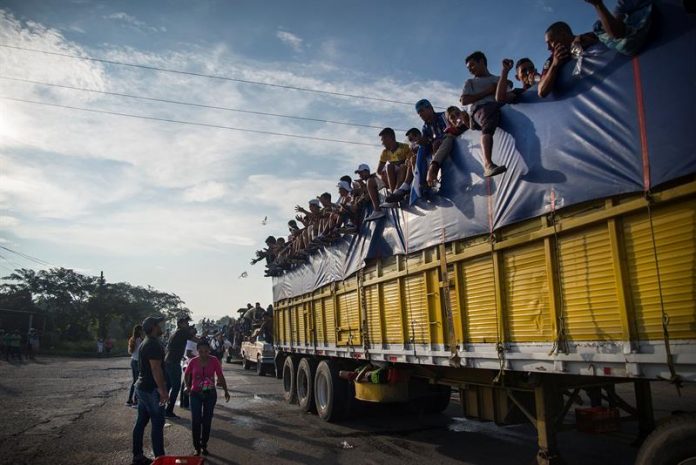 The caravan of Central American migrants, mostly Hondurans, continued today to advance through the southern Mexican state of Oaxaca to the United States, the same day a new contingent of some 2,000 people entered Mexico from Guatemala.

This second caravan attempted to enter Mexico by crossing the Suchiate River, on the border with Guatemala, but agents of the Mexican Federal Police prevented it and the migrants remained stranded for nearly two hours with water up to their necks until they agreed to enter through of a migratory customs.

Through this access, 1,895 people entered the country, most of them Hondurans, who requested refuge in an orderly manner before the immigration checkpoint and were later transferred to a shelter run by the National Institute of Migration (INM) in the state of Chiapas.

In turn, members of the caravan of some 7,000 people who arrived in Mexico on October 19 arrived today at the town of Santiago Niltepec, in the state of Oaxaca, with the intention of reaching the US border.

The US government announced today that it will deploy 5,200 soldiers on its border with Mexico to prevent the entry of migrants and President Donald Trump demanded on Twitter “that they turn around and return to their country.”

Despite this threat, groups of migrants were arriving at Santiago Niltepec today, after crossing without incident a migratory station, and are ready to arrive tomorrow at the municipality of Juchitán, after having traveled about 400 kilometers since they crossed the border. border from Guatemala.

During this journey, the solidarity of many Mexicans who gave food bags and bottles of water to the migrants, to whom they gave messages of hope or offered them free car trips, surfaced again.

The municipal authorities of Niltepec prepared humanitarian aid for the exhausted migrants, who overflowed the center of the population, streets and surrounding parks as well as buildings abandoned by the earthquakes of September 2017.

“The trip has been hard, Lately they do not accompany us the patrols as they should have been quite complicated because of the food, the needs of the bathroom but here we go, thank God,” explained José Hernández, a Honduran member of the caravan.

More than 500 children in the caravan suffer respiratory diseases and a pregnant woman lost her son during the course of the march, as confirmed by the Human Rights Ombudsman of the People of Oaxaca (DDHPO).

“We feel an absence of the Mexican state as a whole, an absence of real humanitarian attention, what is being done is insufficient,” Arturo Peimbert Calvo, the state ombudsman, lamented.

The care modules of the Ministry of Health are insufficient and people who come to ask for help with bleeding and sore feet only wash the wound and put gauze without giving them any analgesic.

“They put a gauze on me but they did not give me a pill, they said it was not going to hurt, but I can not walk and my feet are bleeding,” said Anselmo Santiago, a member of the caravan ready to arrive in Juchitán on Tuesday.

The mayor of this municipality, Gloria Sánchez López, reported that food is being collected for the caravan’s migrants: “Here we are waiting for them and we will offer them all the support they need because we know how to be supportive and reciprocal.”

These migrants reject the proposal of the president of Mexico, Enrique Peña Nieto, who offered him health care if they asked for refuge before the Mexican immigration authorities without leaving the southern states of Oaxaca and Chiapas.