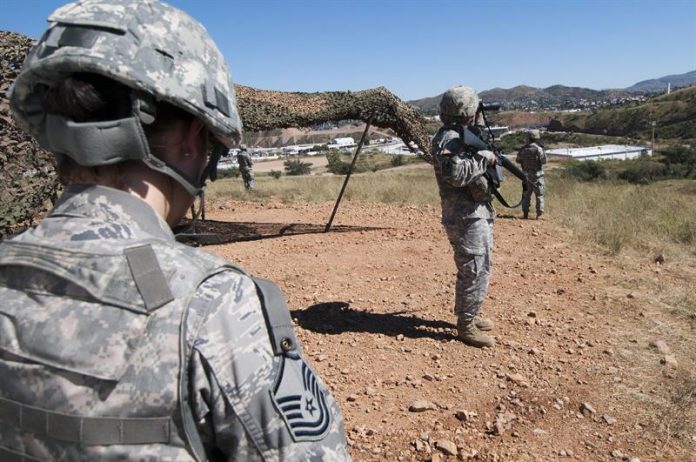 The government announced today that it will send 5,200 troops to the Mexican border this week to respond to the arrival of two caravans of Central American immigrants, a movement that comes in the middle of the campaign for the legislative elections on November 6.

A group of 800 soldiers is on their way to Texas from the military bases of Fort Knox and Fort Campbell, both located in Kentucky, the commander of the North Command of the Department of Defense, General Terrence J., explained at a press conference today. ‘Shaughnessy.

The general indicated that, by the end of the week, the number of troops will be 5,200 and he acknowledged that those who carry weapons will keep them during their mission at the border.

The objective of the soldiers, emphasized O’Shaughnessy, is to “harden” the border and “improve” the capacity of the immigration agents of the Customs and Border Protection Office (CBP) before the arrival of two caravans composed of some 6,500 people.

A law of 1878 prohibits the use of soldiers for tasks of security and public order at the national level.

That is why, O’Shaughnessy said, the military will limit itself to supporting border agents in air operations to detect illegal activities, as well as in mechanical work, such as repairing vehicles, and offering medical care to migrants who need it.

Among his tasks will be to reinforce the ports of entry and detect those weak points and for which immigrants could try to cross irregularly, detailed O’Shaughnessy.

The troops, mobilized under what the authorities have called “Operation Patriot Faithful,” will first reinforce the Texas border and then move on to Arizona and California.

Among the soldiers, there will be three battalions of combat engineers, troops specialized in aviation and other soldiers dedicated to logistics and medical treatment.

In addition, according to O’Shaughnessy, the Pentagon will send three helicopters with night vision to the border to transport border agents from one place to another.

The Pentagon has already made available to the Border Patrol 35 kilometers of barbed wire and has the capacity to give them up to 240 kilometers, O’Shaughnessy said.

The head of the Office of Customs and Border Protection (CBP), Kevin McAleenan, said today that his agency has also been preparing for the arrival of immigrants and, currently, has a thousand additional troops ready to act in the posts, among which there are riot personnel.

Another 830 CBP agents are ready to go to the areas between entry posts, where there is usually less vigilance.

McAleenan tried to de-link the deployment on the border with the elections and said the authorities are facing a “humanitarian crisis” on the southern border with the arrival of a growing number of immigrants, mostly from El Salvador, Guatemala and Honduras.

The president, Donald Trump, has tried to use immigration to mobilize his base in the elections on November 6, when the House of Representatives and a third of the Senate is renewed.

On Twitter, the president insisted today that “many gang members and very bad people” are “mixed” in the caravan.

“Please turn around, they will not be admitted to the US unless they follow the legal process.” This is an invasion of our country and our Armed Forces are waiting for you! “Trump exclaimed.

The military that will be deployed this week will join the 2,100 National Guard troops – a reserve corps of the Armed Forces – who have been on the southern border since April due to another caravan of migrants, which in that case began its journey in southern Mexico.

According to McAleenan, some 3,500 people now integrate the first caravan, which was made up of 7,000 immigrants; while 3,000 are part of the second convoy.

The first caravan left on October 13 from San Pedro Sula (Honduras) and currently marches through Mexico; while the second convoy entered Mexico today, but its members surrendered to the authorities after they were prevented from entering by force.