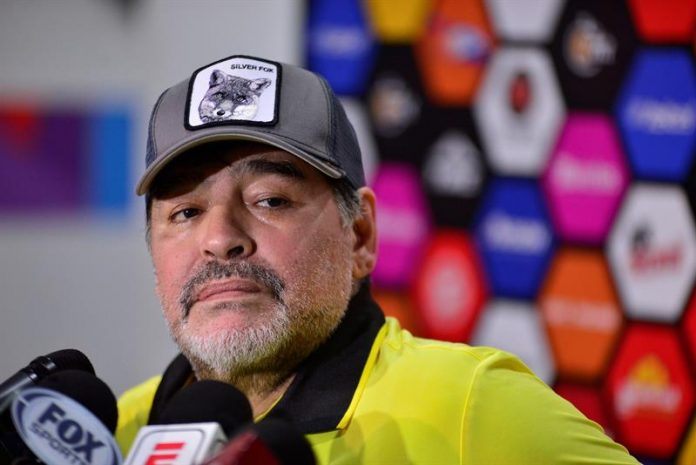 To 12 days of turning 58 years, the health of the Argentinean Diego Armando Maradona has returned to wake up uncertainty after a video circulated in the social networks reveals his problems to walk.

The images show Maradona walking almost hunched next to his technical assistant, Luis Islas, and his tired step is more a consequence of some ailment than the extra kilos in his anatomy, so that versions of a possible arthrosis condition have appeared. in both knees.

Since he directed his first training with the Dorados, Maradona showed difficulties in his hip movement and although the transcended have not been confirmed by the medical team, it is a fact that is far from good physical condition.

In addition to the injuries suffered as a professional footballer and drug and alcohol abuse for years, something recognized by himself, Maradona suffered infiltration on a regular basis when he was the best player in the world and more than 20 years ago he was treated with cortisone to relieve pains, which usually leave sequels, according to doctors.

The background of Maradona betray the poor health of the coach, with a history plagued by ailments: hypertension in 1997, heart failure in 2000, lung infection in 2004, obesity in a part of his life and insomnia.

Although in 2005 ‘the Pelusa’ underwent a gastric bypass operation, then gained weight and underwent an operation again.

In the last World Cup in Russia 2018, the Argentine was on the verge of fainting during a game of the Albiceleste team, after which he had maintained an acceptable face in Mexico, where he was hired last month to direct the Dorados, with who has three victories and one defeat in the Liga de Ascenso.

The video has raised concerns about the health of Maradona and is to see if he or his team speak in the next few hours about it.

Next Saturday, the Argentine coach will be on the bench in the match in which the Dorados, eighth in the standings, will visit the Miners of Zacatecas, located in third place, to which they must win to not leave the qualifying zone .