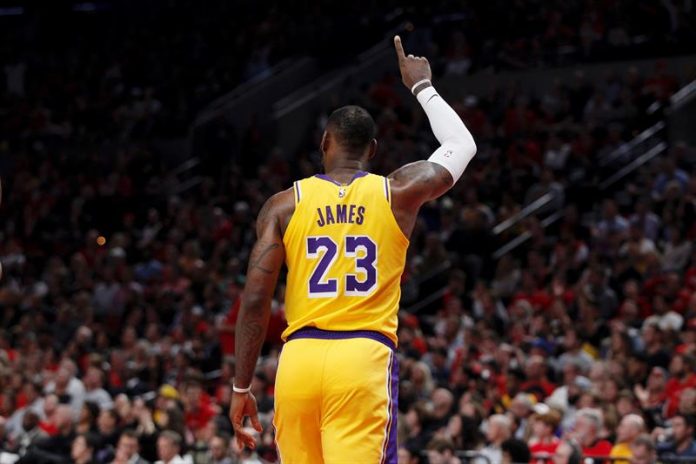 Star forward LeBron James made his debut with the Los Angeles Lakers and could not avoid the defeat, which he considered “normal” given that his new professional stage requires a “process” that will not be easy and will also need patience and time.

James and the Lakers traveled to Portland, where the local team of the Trail Blazers, who devoted the day of debut in the new season to the memory of owner Pau Allen, who died last Monday, won by 128-119.

The trio of Trail Blazers low men, Damian Lillard and Canadian Nik Stauskas reserve, along with guard CJ McCollum imposed his inspiration encestadora to give the Trail Blazers the sixteenth consecutive victory in the duels against the Lakers .

Lillard of great leader in the direction of the game and the offense of the Trail Blazers contributed 28 points (9-21, 2-7, 8-8), six rebounds and four assists.

But it would be Stauskas, signed last summer as a free agent, who emerged as the winning surprise factor to get 24 points after scoring 5 of 8 attempts of triples, and become the sixth player of the Trail Blazers, who won for the eighteenth time in a row the inaugural season match played in Portland.

McCollum served as the third highest scorer with 21 points and five rebounds, on a list of five players who had double-digit numbers.
Bosnian pivot Jusuf Nurkic had a leading role in the indoor game by getting 16 points, nine rebounds and two ball recoveries.

As expected, the big focus, aside from the tribute to Allen, co-founder of Microsoft, who died at the age of 65, due to complications of blood cancer, was James.

The “King” did not disappoint and began his career in front of the Lakers with two spectacular mates at the start of the game, but at the end, his double-double of 26 points and 12 rebounds were not enough to ensure a winning debut.

“Getting the chemistry inside a basketball team is not like an instant breakfast, it takes time and that’s what we’re going to need here,” James said at the end of the game. “I liked how the team fought to be always in search of victory.”

Before the match, James also admitted that when he began his sixteenth season with a new project, his goals were to play the maximum number of minutes and fight for a champion ring.

“Where I’m going, my only big goal is to fight for league titles, and with the Lakers it will not be the exception,” said James, who already has three, two wins with the Miami Heat and another with the Cavaliers. Cleveland after having played the last eight consecutive NBA Finals.

James did not want to put himself back in the Finals, but he praised the young talent inside the team with players like Brandon Ingram, Lonzo Ball, Kyle Kuzman, Josh Hart and rookie Moe Wagner, as well as the presence of veterans as the base Rajon Rondo.

Before James’ debut with the Lakers, the Philadelphia Sixers and the Miami Heat got wins, which were the first in the new season.

Once again the combination of Cameroonian center Joel Embiid and Australian baseman Ben Simmons was the key to the balanced attack of the Sixers who won by 127-108 to the decimated Chicago Bulls.

Embiid finished with a double-double of 30 points, 12 rebounds – 11 defensive -, 3 assists, a recovery of the ball and four blocks that left him leader in the inside game of the Sixers, who sentenced the game in the third period with partial 40-20.

While Simmons was in charge of directing the game and being the most complete by achieving the first triple-double (13 points, 13 rebounds and 11 assists) in his second game of the new season, after that in the first, against the Celtics of Boston, already had a double-double, although in the end they lost visitors the opening match by 105-87.

Simmons, 22, last season finished as the best Rookie of the Year, after all of the 2016-17, after being chosen number one by the Sixers, was lost due to a serious injury he suffered with the fracture of a bone of the right foot.

Another tall foreign man, Canadian center Kelly Olynyk, with 0.2 tenths of a second, scored the basket that allowed the Heat to beat home by 112-113 to the Washington Wizards, who made their debut in the new season.

Having lost last night frustratingly by 104-101, also visitors, against the Orlando Magic, the Heat, with no time to rest, found their way to victory.

Forward Josh Richardson with 28 points, five assists and four rebounds was the Heat’s top scorer, who dominated the game under the hoops with 55 balls captured by 40 of the Wizards.

The base John Wall finished as the leader encestador of the Wizards when contributing 26 points, but it failed 5 of 6 attempts of triples, besides distributing nine attendances.