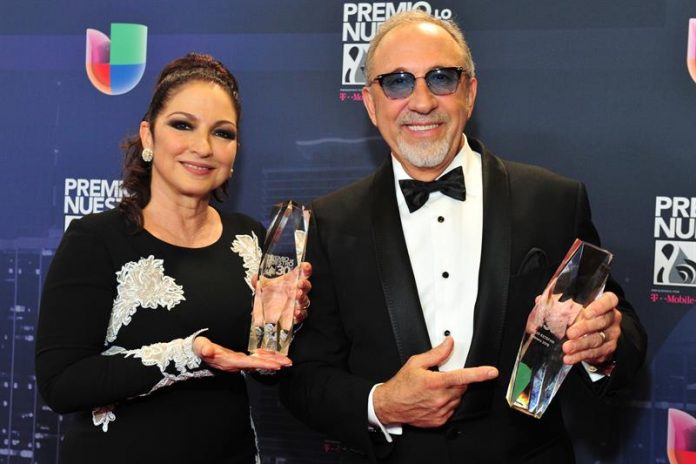 The couple Emilio and Gloria Estefan have been awarded the Gershwin Prize, the country’s highest accolade to popular song, becoming the first “Hispanic heritage” artists to receive it, the Library of Congress announced today.

“The music of Emilio and Gloria Estefan makes you stand up and dance at your own pace,” Congress librarian Carla Hayden said in a statement.

“They are the creative force behind the popularity of Latin music in our culture,” Hayden added, “the professional and personal journey of this dynamic couple reflects the American dream and we are very happy to honor their musical legacy.”

The Gershwin Prize, awarded in honor of the composers Ira and George Gershwin, is awarded as a tribute to the work of a lifetime in popular music.
The singer, actress and composer Gloria Estefan said she feels “deeply honored”, along with her husband, for being recipients of this award.

“This award celebrates the success of using ‘the song’ as a vehicle of musical expression and cultural understanding for a lifetime, and we feel privileged to be able to create and share our music,” the artist said. “We are immensely honored to be chosen to receive this great recognition. “

“From the moment I started singing I’ve been attracted to the symbolic songs of the talented Gershwin brothers and I’ve had the privilege of recording several of them,” he said.

The couple will receive the award in a concert tribute in which other artists will participate in March 2019 in Washington, although an exact date has not yet been set.

The music producer Emilio Estefan thanked in the statement the awarding of this award: “My life and musical career have been a blessing and I feel very honored by this incredible award and to share it with my wife,” he said.

“I only hope that our careers will influence a new generation of composers and producers.” Throughout my career, my desire has always been to inspire immigrants and be an example that, with hard work and dedication, all your dreams can be made reality, “he stressed.

The Library of Congress highlighted in its announcement that the couple symbolizes the cultural diversity of “the American musical experience”, having created, as composers, a unique sound of Latin rhythms.

“They have transcended cultural boundaries, transformed their creative ingenuity into entrepreneurial opportunities and community activism while they have propelled the careers of multiple Latin artists to stardom,” the text said.

The Library recalled that, during their more than 30-year career, they have built a musical empire and made listening to music with Latin rhythms one of the favorite pastimes of the United States.

According to the biography provided by the institution, Gloria and Emilio Estefan have been married since 1978 and began their rise to fame in 1985 with Miami Sound Machine.

Some of the successes of this Cuban-American couple are “Conga,” “Turn the Beat Around,” “Get on Your Feet” and “Rhythm Is Gonna Get You.”

The song “Rhythm Is Gonna Get You” was included in March 2018 in the National Recording Registry, an exclusive group of songs selected for preservation due to its cultural, historical or aesthetic importance for the audio heritage of the nation.

Both have won 26 Grammy awards as a whole, and accolades such as the Presidential Medal of Freedom, the nation’s most important civil honor.