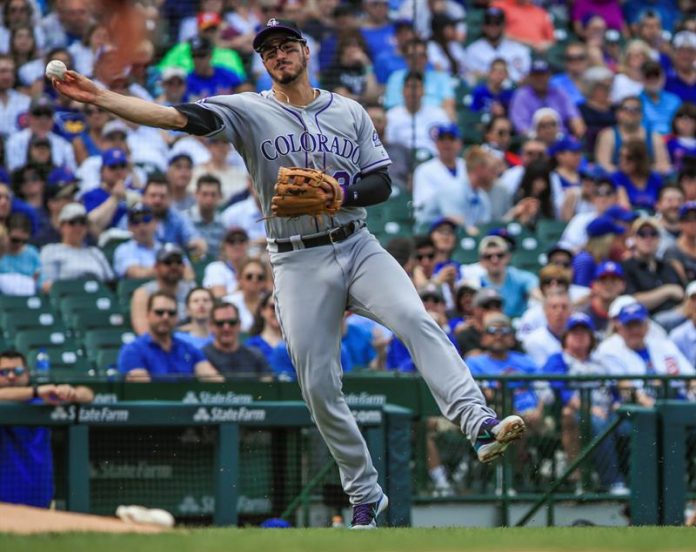 Equality in the fight for the three divisional leaders of the National League remained one more day with the victories achieved by the Colorado Rockies, the Chicago Cubs and the Los Angeles Dodgers.

Nolan Arenado and Trevor Story hit homers, Kyle Freeland appeared effective on the mound until the seventh inning and the Rockies won by beating the Arizona Diamondbacks 10-3 to extend their lead to the Old West Division.

David Dahl had three hits and drove in two runs to help Colorado get one and a half games ahead of the Los Angeles Dodgers who also won 7-8 at the St. Louis Cardinals.

While they also excel in 4.5 games to the Diamondbacks, who occupy the third position.

Arizona ruled out opening right Clay Buchholz due to tension in his right elbow. Matt Koch (5-5) took the mound in his place to give four touchdowns and eight hits in just three innings.

A.J. Pollock hit a home run for Arizona, which is 3-12 in September. The Diamondbacks lost 5-4 on Wednesday when designated hitter LeMahieu hit a two-run homer to Yoshihisa Hirano in the ninth.

Freeland (15-7) only received two undisputed and one run over six episodes before giving a triple to Steven Souza Jr. and a double to Nick Ahmed in the seventh inning.

Puerto Rican third baseman Javier Báez produced the victory race with a touch in the tenth and the Cubs outscored the Washington Nationals 3-4 in a game that had been postponed on rain Sunday.

Right fielder Kris Bryant hit a double with an “out” in the tenth against reliever Sean Doolittle (3-3) and advanced to third base with a single from the former Nationals player, second baseman Daniel Murphy. .

Baez, who had hit a homer in the sixth inning and drove in three runs in total, placed the touch just to the right of first baseman Ryan Zimmerman for Bryant to cross the plate.

The Puerto Rican baseball player, candidate for MVP, has 31 home runs and leads the Old Circuit with 103 RBIs.

Chicago extended its advantage at the top of the Central Division to one and a half games over the Milwaukee Brewers, who had a rest day.

While Washington fell to eight and a half under the Atlanta Braves in the East Division.

The Dominican Pedro Strop (6-1) took the victory after throwing a ticket and two thirds in white for Chicago, while his compatriot Randy Rosario, left-hander of 24 years, took charge of the tenth chapter to sign the first save of his career .

His compatriot Manny Machado hit a home run and drove in three runs to support Clayton Kershaw in the duel that the Dodgers won 7-9 at the St. Louis Cardinals.

The Dodgers won the first meeting of a four-team series between playoff contenders. They cut a five-game losing streak to the Cardinals and approached a San Luis game in the fight for the second wild card.

San Luis, who had a 22-6 record in August, suffered his second straight setback and fell to a 5-7 record in September.

Kershaw (8-5) had not pitched at Busch Stadium since losing the fourth game of the National League division series in 2014.

This time, he distributed eight strikeouts in six innings, during which he allowed four runs, three clean, and eight hits, in addition to awarding a couple of tickets.

Machado led the Dodgers’ Latin American batting by going 4-3 with two runs and three RBIs, while Puerto Rican Kike Hernandez was 3-2 with a run scored.

The Cardinals also had the Dominicans Yairo Múñoz leaders in their offense by hitting 4-2 with two runs and Marcell Ozuna of the Dominican Republic went 5-2 with one run scored and two RBIs.

Left fielder Michael Conforto and third baseman Todd Frazier hit two home runs in a row when they had two outs in the ninth inning and completed a comeback by the New York Mets that beat the Florida Marlins 4-3 in the first game of the game. the double billboard that they carried out.

Reliever Kyle Barraclough reached the duel with one out in the ninth, and retired the popup Dominic Smith, before Conforto shot a line before a change of speed, with a 1-0.

The second game also fell on the side of the Mets with Conforto that produced three runs, Jason Vargas looked effective in six innings, and the Mets won 5-2 to the Marlins.

Conforto brought a double to right field in the fifth inning, to push a pair of runs, with which the Mets put themselves up with the advantage 3-2.

The lit gardener added a single tug in the seventh inning.