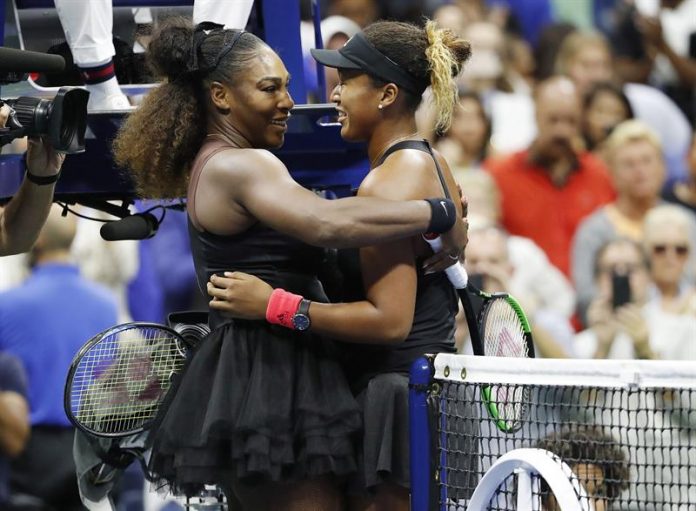 The tennis player Serena Williams, who played today the fourteenth final of the US Open, starred in the worst show of his successful professional career when facing the referee of the match he lost 6-2 and 6-4 to the Japanese Naomi Osaka, which is the new champion of the last Grand Slam tournament of the season.

A frustrated Williams, 36, began to mourn when discussing with chairman Carlos Ramos on two warnings: one for receiving advice from his coach and another for destroying his racket after Osaka broke his serve in the second set and put the marker with partial against your 3-4.

The youngest of the Williams sisters, who was looking for the seventh title in Flushing Meadows and the twenty-fourth Grand Slam, called a tournament official and discussed her case, saying that the men had discriminated against her and had not treated her well in the past. warnings and punishment with a bit.

Williams maintained his point of view that he did not cheat and wanted an apology, while maintaining that he should not have received a penalty of one point.

In this regard, former US Open champion and Williams compatriot Chris Evert said he believed Ramos could have shown more restraint.

Williams after giving up his first advantage in the game in a game in which he committed a double fault twice, broke his racket.

He received a penalty point after breaking the racket, which allowed Osaka to start serving the sixth game with 15-0.

Previously Williams had also violated the code of behavior for receiving advice from the guest box of his coach Patrick Mouratoglou, and then the break of rackets made him receive a penalty point.

After realizing that he had already lost a point, Williams began to shout at Ramos.

“You owe me an apology,” he said. “I have never cheated in my life, I have a daughter and I defend what is right”.

Williams told Ramos that his coach, Patrick Mouratoglou, gave him the nod, which is just a “Come on.”

“I do not cheat to win, I prefer to lose,” Williams was heard telling Ramos.

A television replay showed Mouratoglou doing Williams a gesture with both hands, as if telling him to move forward. There was no sign of approval.

Williams began to enter the network more frequently and broke Osaka in the next game, the only one that managed throughout the match for the partial 2-1.

But that was all he could achieve, given that his loss of control made Osaka, who played the game of his life, achieve victory and proclaimed with all the honors and merits the new champion of the US Open to overcome which has always been his “idol”, which he imitates in his game and in which he has always been inspired.

After concluding the game, which lasted just one hour and 19 minutes, Williams had all the sportsmanship of the world to go to the network and give a big hug to his disciple who is the new “queen” of Flushing Meadows and the last great promise that arrives at women’s tennis to begin the generational changeover.

Both players cried and Osaka received the first congratulations from Williams for the great triumph he had achieved.

“Well, I do not want to be rude, she played well and this is her first Grand Slam,” Williams said after the game, as she struggled to hold back the tears. “Let’s make this the best possible time, give credit to the one who deserves it, and no more boos, Congratulations Naomi!”

Williams then addressed the New York fans who filled the stands of the center court Arhtur Ashe and thanked them for all the support received.

“Thanks to the public, you are really the best in the world, I hope to play here again, it has been a difficult year but thank you very much for everything”, concluded Williams.

Osaka, 20, was beside her crying, while Williams surrounded her with his arm.

Everyone in the Osaka box was filled with tears, including his mother and Williams’ former coach, Sascha Bajin. “