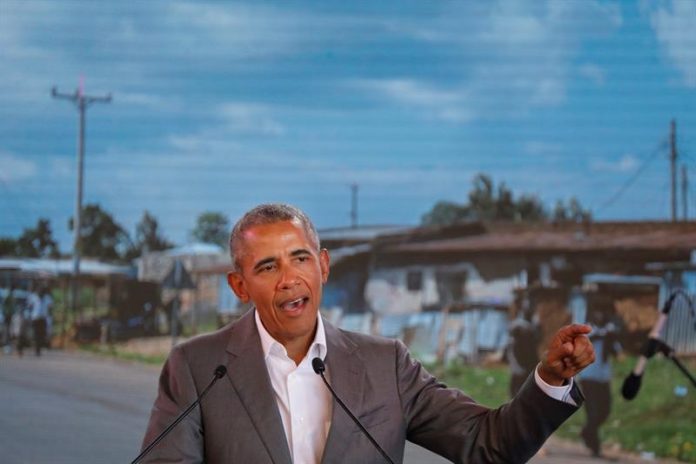 Former US President Barack Obama invoked on Saturday to restore “sanity” in national politics, in a speech that was his first electoral campaign for next November’s elections.

Before more than 750 people gathered at the Anaheim Convention Center in southern California, Obama alluded to the “last two years” in his country, the first under the Presidency of Donald Trump and in which he regretted having seen ” a cycle of rage and division “.

Unlike his speech on Friday at the University of Illinois, this time Obama did not mention the current US president by name and returned to the style he has deployed since leaving the White House, consisting only of veiled allusions to Trump.

“The biggest threat to our democracy is not an individual, a great Super Pac billionaire: it’s apathy, it’s indifference, we’re not doing what we’re supposed to do,” said Obama, who took the stand in a white shirt and sleeves rolled up. .

Under the campaign message of the Democrats, “Take it back” (“#Takeitback”), the former president called on the bases and volunteers to encourage the vote in order for that party to recover the majority in the lower house.

“We will fight for the idea that every child in the United States deserves a good education, for the idea that a worker must earn a salary that allows him to live and that women should earn the same as men,” Obama said. in the midst of ovations and applause from his followers.

The exmandatario addressed the independents, to whom he suggested giving his vote for those who feel they are going to fight for them, as well as the Republicans who say: “I do not recognize what is happening in Washington, that is not what we are in Washington”.

“We are bound by the notion that the Government is a Government for all and not for a few,” insisted Obama, who in his speech of just over 25 minutes appealed to the American people to work together and faithfully “to the best traditions in the United States. “

In this Orange County campus, where the former president has made the first stop of his campaign to call the Democratic vote before the electoral process next November, Obama expressed his support for the seven candidates of this Orange County party for the federal Congress.

In his speech he highlighted the virtues of California hopefuls Josh Harder, TJ Cox, Katie Hill, Gil Cisneros, Katie Porter, Harley Rouda and Mike Levin, on whom he expressed confidence that they will return “decency and sanity” in Washington.

Four of those districts are represented by Republicans, but the Democrats, motivated by the large turnout in the recent primary process, hope to snatch at least two seats.

In addition to California and Ohio, where he will offer a rally on Thursday, Obama is expected to make appearances at least in Pennsylvania and Illinois.

On Friday, the former president broke his political silence with a hard but thoughtful speech in Illinois, in which he warned of the “danger” of these times and appealed to responsibility when he sent a “simple” message: “They have to vote, our democracy depends about it. “

Democrats must snatch 23 seats in the House of Representatives and two seats in the Senate to retake power in both houses of Congress, while the party also faces a disadvantage in nationwide states, where 36 governors will be elected.