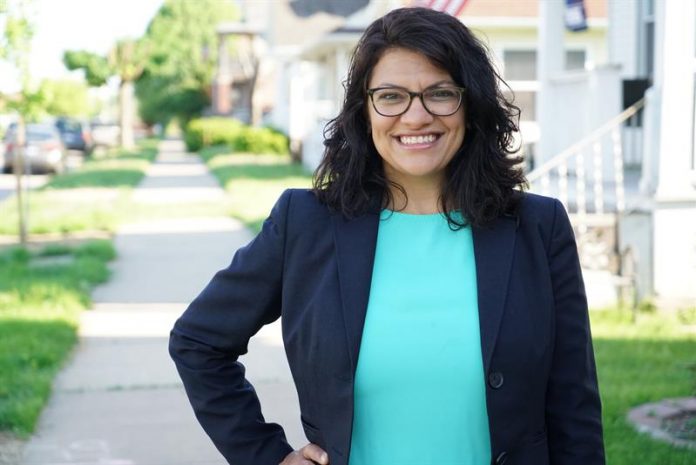 Of Palestinian immigrant parents, Rashida Tlaib could not speak English when she entered school in this country, today, decades later, she is about to be the first Muslim woman to reach the Congress, where she intends to “recover the essence” of civil rights and “social justice”.

Tlaib, with a markedly progressive agenda, won the Democratic primaries for the 13th congressional district of Michigan last month, revolutionizing the political landscape and claiming, as he assured in an interview with Efe, the need to end discrimination, not only racial, but also economic in the country.

“Half of my colleagues in Congress are millionaires, and congratulations to the people who are successful, but most of us, most Americans, we are not in that salary range,” argues the Democrat, for whom the elections legislative elections that will be held in November will be a mere proceeding by not fighting with any republican for that seat.

Happy to have achieved his candidacy in “dark times”, Tlaib is happy to be accompanied by other diverse faces in these elections, like the one of the also Muslim Ilhan Omar, or the African-American, Democratic candidate for the governorship of Florida, Andrew Gillum .

“Muslims, women, Latinos, African-Americans: it’s a beautiful rainbow,” he confesses.
One of its main objectives is to “recover the essence” of the Civil Rights Act enacted in 1964, which, it claims, has been “diluted” in the courts over the years, preventing all Americans, without import their color or their social stratum, they can have access to the same opportunities.

Tlaib denounces the “deep disconnection” of the political class with the social reality, which has caused that Law of 64 needs to “go back to its roots” and prevent day-to-day policies from continuing to “discriminate according to the color of the skin, faith or sexual condition. “

Access to education, whose system feeds racial and economic segregation in the country, is one of the clear examples given by the candidate, as well as access to healthcare, on which she advocates a universal health service.

“One of the things we know, for sure, is that the current system is flawed, one of the things that I do not agree with the Democrats is that they allowed insurers to have a lot of hand in the draft of the current health law.” , explains, in reference to the great weight that these companies still have in the access to health in the country.

“I hope we can push hard enough until the universal health system becomes a reality,” he insists, aligning his political approach with figures such as the ex-presidential hopeful, Bernie Sanders.

As for the tension the country is experiencing on migration issues, Tlaib emphasizes that the US It is still a country of opportunities for immigrants, where a person like her, from a humble family from the Middle East, has been able to reach a seat on the Capitol.

“I do not want to think that immigration in this country is what comes from this Administration, it has to be much more than that,” he says, alluding to the harsh policies that the Donald Trump government has adopted in this regard.

But Tlaib believes that Americans are getting used to it, and that now, unlike in the past, many think that these children, those mothers, are “less” than them, because they are not citizens.

“I do not know how we got here, who knows if someone will end his wall and accuse him (in Congress for a political trial),” he asks.

However, and before all the scandals that have flown over the Trump White House, Tlaib does not doubt that “there has been a criminal side to his campaign,” which also “continues” in the White House “trying to cover it up.”

“This is the most important and most powerful position in the world, and there is a man who thinks he is above the law, I believe that this will be what will unite people, whether they are Republicans or Democrats,” he says. Protect the Presidency. “