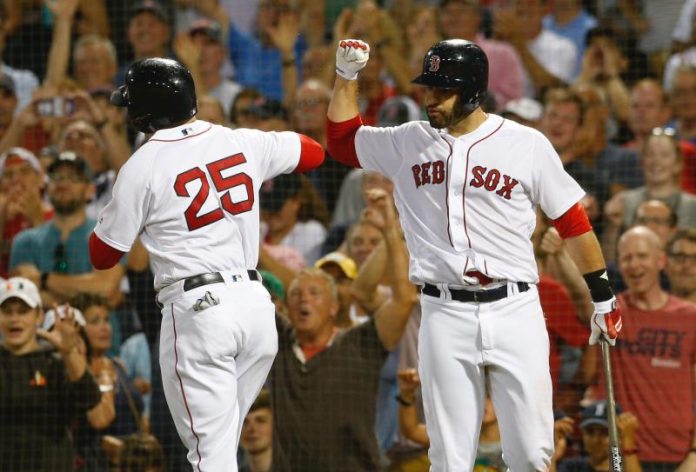 The Boston Red Sox and the Cleveland Indians once again had a winning day in the American League and increased the advantage they have as leaders in their respective Eastern and Central Divisions, which brought them closer to the title of champions.

Jackie Bradley Jr. contributed a sacrifice fly as part of a four-run cluster in the seventh inning and added a single that broke the tie in the ninth, for the Red Sox (93-42) to beat 4-9 at home. the White Sox of Chicago.

Ian Kinsler ignited the decisive attack with a single against Thyago Vieira (1-1), when there was one out, to total three hits.

Blake Swihart managed a ticket before Bradley Jr. pushed Kinsler through a line to the right field. Boston, leader of the majors later extended the difference.

Andrew Benintendi added another simple tug, while J.D. Martinez hit a three-run homer, his 39th homer in the season.

This placed the board at 9-4 and caused many of the 18,015 spectators to leave the park.

Second baseman Jason Kipnis hit a three-run homer that broke the tie in the sixth and gave the Indians a 5-3 victory over the Minnesota Twins.

The Indians (76-57), leaders of the Central Division, took a hard-to-beat lead of 14 games over Minnesota, which is in second place.

Cleveland holds a record of 31-11 against rivals in his division, and needed this win to beat the Twins 10-9 in their series of clashes during the season.

Kipnis got his home run (13) against reliever Alan Busenitz. The ball passed just above the wall of right field and crowned an attack of four entries in the entrance.

Andrew Heaney pitched six innings without scoring, Andrelton Simmons capped a four-run attack in the sixth through a double that produced three, and the Los Angeles Angels defeated the Houston Astros 2-5 at home.

Heaney (8-8) allowed five hits in the course of his work and prescribed six strikeouts to win as a visitor, something he did not get since September 2, 2015, when he pitched in Oakland.

The southpaw, who allowed five runs and six innings, last Friday, in his previous start against the Astros, improved to a 3-1 record against Houston in the season. He allowed less than two runs in three of those four starts.

Despite the loss, the Astros (82-52) remain leaders of the Western Division with two and a half games ahead of the Oakland Athletics who also lost at home by 1-7 against the Seattle Mariners.

Second baseman Robinson Cano hit two hits and drove in a run, Mitch Haniger hit his 23rd homer of the season and the Seattle Mariners soon began the offense against the Athletics.

Wade LeBlanc (8-3) pitched seven innings without allowing touchdowns in which he allowed three hits and gave away three walks, while prescribing four strikeouts. Seattle had lost three in a row and five of seven before taking the first of this four-game series.

Haniger homered Frankie Montas (5-4) with one out in the fourth inning, and also hit a single early in the game. Jed Lowrie hit a producing single for the Athletics.

Víctor Martínez made two home runs, including one in the ninth inning, and Niko Goodrum followed immediately with another homerun against reliever Dellin Betances for the Detroit Tigers to go back and beat the New York Yankees 8-7.

The Tigers, last of the Major Leagues in the section of home runs, got five and broke a streak of five consecutive defeats.

New York started the day seven and a half games behind Boston, leader of the Eastern Division of the American League and the majors.

But they also started the day with a lead of four and a half games against Oakland, in the bid for the first wild card to the competition of the final phase.

Luke Voit hit a fly near two runs in the seventh inning, for the Yankees to take the lead 7-5. But Betances (4-4) gave a ticket to Nicholas Castellanos with one out in the ninth inning, Martinez contributed the home run right field.

It is the twelfth time that the Venezuelan designated hitter has achieved more than a homer in the same game.