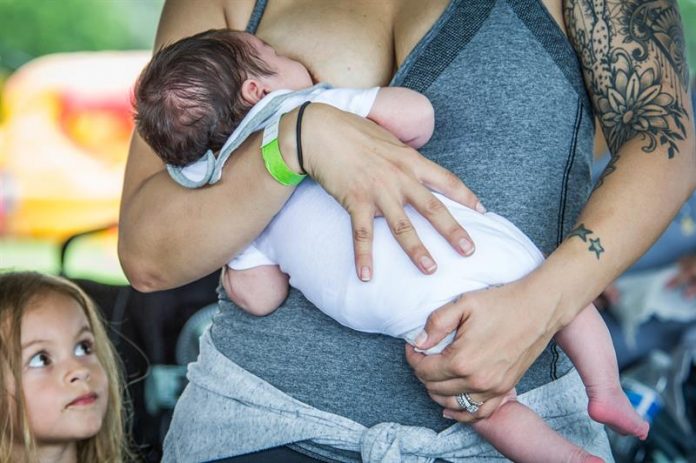 Only 46.9% of the four million babies born in the US In 2015, it received exclusive breast milk until three months, when it is recommended that this practice be the only one during the first six months, health authorities reported today.

In fact, the study released today by the Centers for Disease Control and Prevention (CDC), highlights that, while 83.2% of babies began receiving breast milk, “many stopped receiving it earlier than recommended.”

The CDC’s “Lactation Report 2018” emphasizes the importance and benefits of exclusive breastfeeding for the newborn during its first six months of life.

But while 57.6% of babies are still breastfed at six months of age, only 1 in 4 is breastfed exclusively, the study says.

However, Ruth Petersen, director of the Division of Nutrition, Physical Activity and Obesity of the CDEC, was satisfied with the fact that “most American babies start with breastfeeding and more than half continue to breastfeed. six months “, even if not exclusively.

The report also highlights that only 35.9% of newborns receive breast milk at 12 months and that 49% of employers offer programs to support breastfeeding in the workplace.

Among the benefits provided by breastfeeding, both for the woman and the newborn, are the reduction of risks of asthma, obesity, type 2 diabetes, respiratory and ear infections and deaths of babies due to causes such as the Death Syndrome. Sudden Infant (SIDS).

In addition, continues the report, breastfeeding “can help lower the risks of hypertension in the mother and breast and ovarian cancer.”

CDC scientists and researchers analyzed data on breastfeeding practices in 50 US states: the District of Columbia, Puerto Rico, Guam and the US Virgin Islands.

The CDC recommendations in support of mothers include measures to “encourage hospitals and health personnel” to use tools that implement breastfeeding, “such as” helping mothers access lactation consultants. “

“All sectors of society, from the family to hospitals, offices, clinics, organizations and workplaces can play a role in improving the health of families by supporting breastfeeding,” he said.