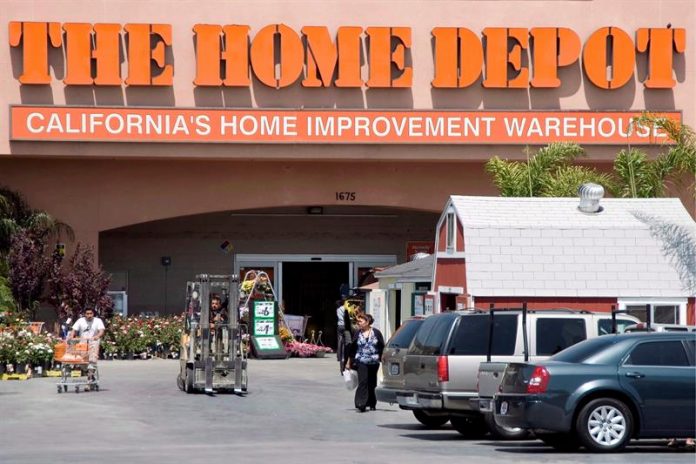 Home Depot, the largest chain of DIY stores and home improvement in the world, won 5,910 million dollars in its first fiscal semester, 26.1% more than in the same period of the previous year, announced that company today.

The company based in Atlanta (Georgia, USA) obtained in those six months a net profit of $ 5.12 per share, compared to $ 3.91 a year earlier.

The company’s turnover between February and July reached 55,410 million dollars, an increase of 6.6% over the previous year, when it entered 51,995 million.

Regarding the results of the second quarter, the most followed Wall Street, the firm had a net profit of 3.506 million dollars (3.05 dollars per share), 31.2% more than in that section of 2017.

Between May and July, Home Depot entered 30,463 million dollars, representing an increase of 8.4% compared to the same period last year and a record for the company, which also recorded its maximum earnings for a second quarter.

This was highlighted by the president and CEO of the company, Craig Menear, who attributed the good data to a “rebound” of the “seasonal” business compared to the first quarter, and pointed out that the “results in general exceeded our expectations”.

“These results exemplify the outstanding execution of our team composed of employees in stores, vendors, suppliers and logistics chain,” he added.

Home Depot also revised up its estimates for the year as a whole and said it expects its sales to increase 7% year-on-year and its earnings per share to grow 29.2% to $ 9.42.

The financial accounts, released early this morning, were better than analysts had expected and the company’s securities advanced up to 1.2% in the operations prior to the opening of Wall Street.

However, once the session started, shares lost 0.94%% on the New York Stock Exchange, where Home Depot is one of the 30 values ​​that make up the Dow Jones Industrial.