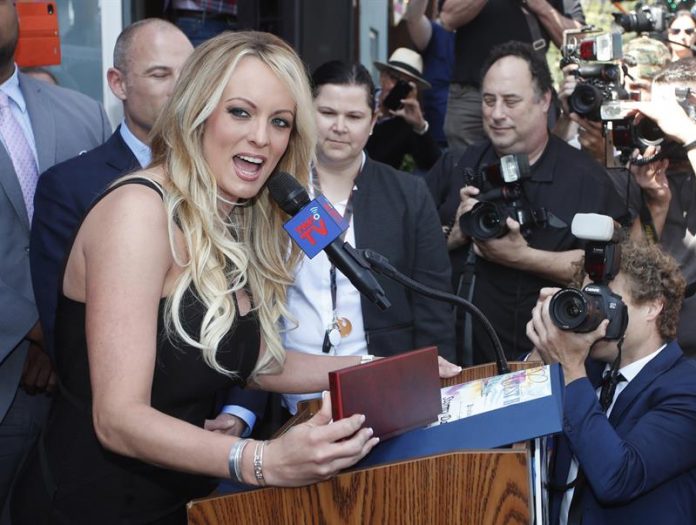 Crain filed for divorce on July 18 in a court outside of Dallas, Texas, where the couple moved a few years ago.

In addition to the divorce, he also requested custody of his daughter and a temporary restraining order against Daniels, which according to local media was granted to prevent the actress from touring the girl.

Daniels launched a tour of various US “strepatease” venues. Taking advantage of the fame gained after revealing an alleged idyll with President Donald Trump.

The lawyer of the actress, Michael Avenatti, said today on Twitter that the “truthfulness” of the divorce petition for adultery filed by Crain is “absolutely disputed.”

“Stormy’s daughter remains her number one priority and she kindly asks for privacy for her family’s sake,” added Avenatti.

Shortly after, however, Daniels also affirmed on Twitter that he does not “want” or “need” privacy: “What I want is true, and it will come out, I am not afraid”.

Crain is the stage name of Brendon Miller, a heavy metal musician who has also participated in the pornographic industry as an actor and producer.

Daniels rose to fame earlier this year, when it was learned that Trump’s ex-lawyer, Michael Cohen, made a payment of $ 130,000 during the campaign to the White House in 2016 to keep secret, supposedly, an adventure he had with the now president in 2006, shortly after he married Melania.

The actress has gone to court to overturn the pact, a controversial litigation that has not yet been resolved, and has reported intimidation of the president’s environment.