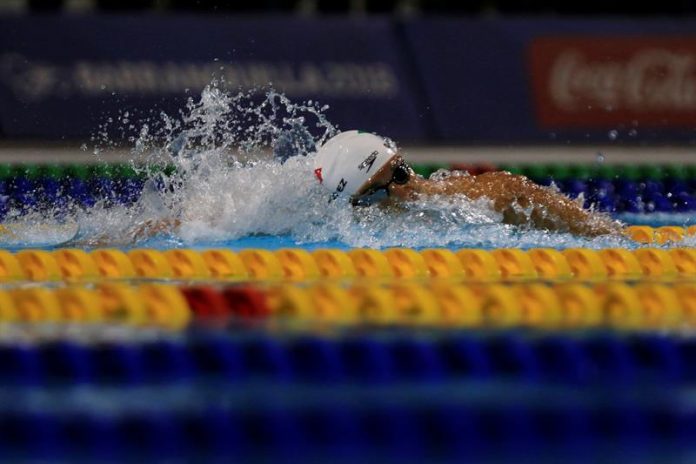 The Mexican swimmers today added four golds for their country in the medal table of the XXIII Central American and Caribbean Games in Barranquilla in the women’s 100 meters butterfly and 200 chest, as well as in the men’s 200 back and 4×100 mixed relays.

The team of 4×100 meters relay, consisting of Daniel Ramírez, Horus Briseño, Ana Sofía Revilak and Allyson Macías, completed the race in 3 minutes, 31 seconds and 66 hundredths, while the Colombians and the Venezuelans, equaled time and obtained the silver at the end of the test in 3: 33.88.

Meanwhile, Byanca Rodríguez won the 200m chest test and broke a record for the Central Americans and the Caribbean with a time of 2: 25.60. The Mexican Esther González also hung the silver and the Margaret Higgs Bahamian, the bronze.

The third gold medal of the North American country fell into the hands of Andy Song, who won 200 back and broke a record of Colombian Ómar Pinzón, who was third in today’s race.

Song finished the race in 1: 59.95 and overtook the Cuban Aira Barrera, who reached a second and 66 hundredths.

“After this medal I have an individual test and then the individual relay, with which I hope to give another medal to my country, the goal is Tokyo, I have two years left and I am sure I will achieve it,” Song told Efe.

The last of the Mexican golds achieved it, with record included, Miriam Guevara to triumph in the 100 meters butterfly, competition in which the silver was awarded by the Venezuelan Isabella Páez and the bronze Jamaican Alia Atkinson.

“Mexico today was very good, we got most of the medals, in fact when my partner Andy won, I was screaming like I screamed when I won my test, because he felt very father to see a fellow swimmer and wave the Mexican flag”, he said, remarkably excited, Guevara.

The Puerto Rican Kristen Romano, meanwhile, broke a mark that Venezuelan Andreina Pinto had established in Veracruz four years ago and won in the 400 meters combined with a time of 4 minutes, 46 seconds and 31 hundredths. In second place came the Bahama Johana Evans, who added her third medal in the games, and the Mexican Monika Gonzalez was third.

Meanwhile, the 29-year-old Edgar Crespo of Panama won the 50 meters chest in 27 seconds and 56 hundredths, the record of the games, and beat the Mexican Mauro Luna, who arrived in 27.92 and signed the silver. The bronze went to the Colombian Carlos Mahecha, who lost the silver medal by a hundredth with the North American swimmer.

“All the competitors were very good, all eight of us were ready to give the best of each one and thank God Panama was the winner, I am humbled to have competed with these swimmers and excited to have given this medal to my country,” he said. Curly.

El Salvador celebrated its first triumph in the games with Marcelo Acosta, who signed the gold in the 400 freestyle after beating the Mexican Ricardo Vargas and the Venezuelan Rafael Dávila.