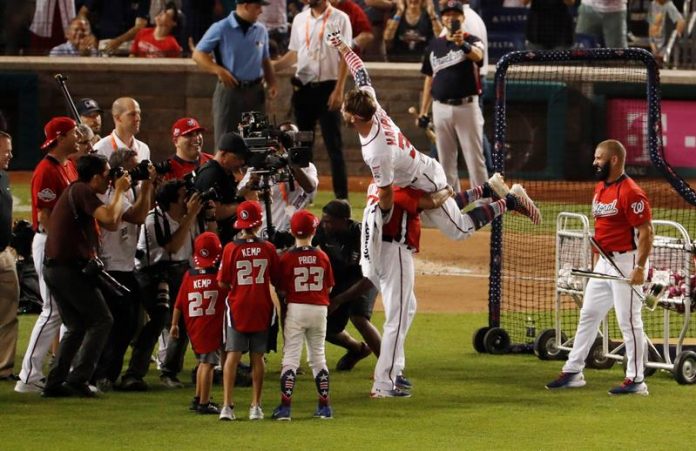 Washington Nationals outfielder Bryce Harper made his home rule and his fans proclaimed tonight as the new All-Star Derby champion at the end of the finals to Kyle Schwarber of the Chicago Cubs. .

Harper thrilled the home fans and the proud pride of his father, with an exceptional show of power that led him to beat Schwarber in the final series by 19-18.

The Nationals slugger hit the victory bamboo in overtime, the reward for hitting two home runs of at least 440 feet (134 meters) during the four minutes of regular time.

After hitting the winning draw, the Nationals slugger launched his battle into the air and aimed both numbers towards the sky while the streamers began to fall on the heads of the 43,698 fans that filled the stands of the National Park.

Harper, 25, made arrangements to have his father, Ron, launch him into the annual contest that is part of the All-Star festivities.

The Nationals slugger, Harper, six times selected by the National League, responded with a performance that caused the loudest cries of the night.

Harper, who showed up with a headband that resembled the District of Columbia flag and a sleeve on his right arm with the stripes and stars of the American flag, was down with 18-9 with 1:20 of time remaining before tracing.

“We have some of the best baseball fans, and to be able to do this in the company of my family, in an incredible moment, not only for me, but for the organization and the fans of the Nationals,” Harper said.

His teammate in Washington, Max Scherzer, the lobby for the National League for Tuesday’s game, also appreciated the moment.

“It’s amazing, we’re at home,” said Scherzer. “The public supports him, he got into rhythm, he did not get complicated and he kept hitting home runs after home runs.”

Harper reiterated that thanks to his father’s throws, he allowed him to hit the ball with solidity and consistency.

“I’m only as good as the one who throws me the ball,” Harper said with a smile before the reporters.

The great defeated were the only two Latin Americans that competed, the Venezuelan Jesús Aguilar, of the Brewers of Milwaukee, and the Puerto Rican Javier Báez, of the Cubs of Chicago, to the being, both, eliminated in the first round.

Aguilar, 28, the first classified of the group of eight players who participated in the contest, was defeated by Rhys Hoskins, of the Philadelphia Phillies by 17-12.

The Brewers’ first baseman, summoned to his first All-Star Game, reached a top distance of 428 feet (131 meters) and his fastest-speed hit was 106 miles (171 kilometers) per hour.

While Báez, 25, appeared to be on his way to the second round when he pulled 16 balls out of the field in the National Park, but with a fury of long balls at the end of his turn, Max Muncy of the Oakland Athletics came to surpass to the second base of the Cubs for one (17).

Baez’s longest home run, who also participated in his first All-Star Game, was 479 feet (146 meters), while his fastest exit speed was 108 miles (174 kilometers) per hour.