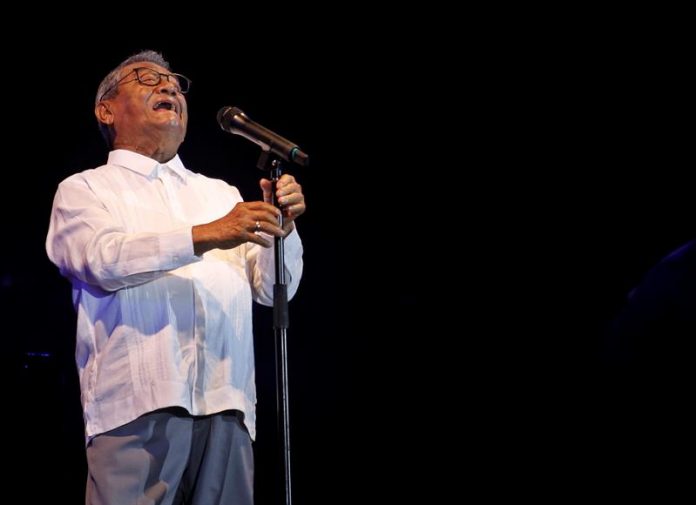 The Mexican singer-songwriter Armando Manzanero, who was one of the most popular idols of romantic music several decades ago, today gave a unique concert to the Cubans with which he relived that seduction with his best known songs and some of his most recent productions.

The song “Somos novios” opened the first recital of the octogenarian singer in Cuba, one hour later than planned, in an open-air stage set up in front of the emblematic Malecón Avenue in Havana, where several thousand spectators gathered, among the who was the president of Cuba, Miguel Diaz-Canel.

This is the second concert attended by the president of the island since his arrival on the presidency on April 19 last, after witnessing the debut of the Italian singer Laura Pausini with the successful Cuban reggaeton duo Gente de Zona a few weeks ago in this capital .

Then he continued “This afternoon I saw rain” that the audience chanted animated by the singer, first to offer a concert held with clean energy on the Caribbean island with what demonstrated his commitment to protecting the environment.

Before sitting down at the piano to sing “I’m going to turn off the light” Manzanero took advantage of a brief silence to express his gratitude “to everyone who put a grain of sand so that my classmates and I could have the privilege of being in this blessed land that It’s Cuba. ”

Then he received one of the invited Cuban musicians, the traditional music singer Elíades Ochoa, who joined the famous project Buena Vista Social Club, who accompanied him with his guitar to sing “El ciego”.

Then came his success “Contigo aprendí” with “Nada personal” shared the stage with the Mexican singer Aramza, who reported that he met Manzanero when he delivered the song “Dime” to interpret for the soap opera “Mirada de mujer”.

Aramza said that for more than twenty years he has maintained a “musical complicity” with maestro Manzanero, of whom he sang in this presentation the theme “Whatever.”

Before singing his song “Como yo te amo”, Armando Manzanero told the Cubans that he belongs to the indigenous ethnic group of Yucatan and said: “I am Mayan”, although he said that he also has European blood in his veins.

With the support of his musical group, the 82-year-old composer and music producer interpreted “We did not need time”, “I do not know” and “I’ll wait”, and he linked one song to another with the memory of family anecdotes and his youth that inspired topics such as “I am going to change” and “Mia”.

Together with the Cuban singer Haila María Mompié, their voices joined in the song “No existe limits” which also took over “No”, a song with an arrangement tinged with the rhythm of Cuban salsa.

Manzanero reserved almost for the final to his last guest of the night, the Cuban singer Omara Portuondo, the diva of the Buena Vista Social Club, who played “Adoro”, a classic by the Mexican author who said goodbye with his title “Unforgettable”.

Tonight, the Mexican artist paid off a debt to the Cubans who could enjoy his live or live concert through one of the channels of state television on the island.

Some admirers of Manzanero told Efe that they recalled moments of their youth by listening again to these songs recorded over 40 discs and that have been covered by singers like Alejandro Sanz, Luis Miguel, Frank Sinatra, Andrea Bocelli, Elis Regina and Juan Gabriel.

Throughout his career he has received important awards and recognitions, including a Latin Grammy and a Musical Excellence Award, awarded by the Latin Recording Academy.

The album he is currently promoting is entitled “Tengo Permiso” and is composed of songs composed from texts by his friend, the doctor and writer José Antonio Ceballos.