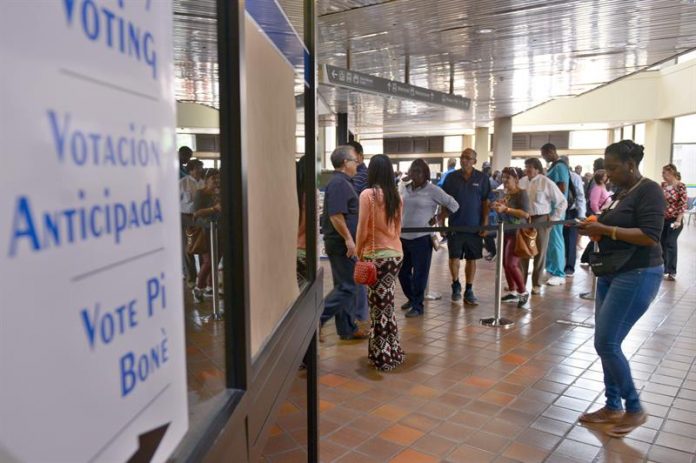 The Hispanic vote will play a “decisive” role in defining the control of the House of Representatives, which will be decided in the next legislative mid-term elections on November 6, several Latino leaders said today.

“Of the 52 competitive seats in the upcoming legislative elections, Latinos are going to play a decisive role in 24 of them, and it is clear that the Hispanic vote matters, but it is a message that many candidates still do not understand,” Efe’s vice president told Efe. the Hispanic organization UnidosUS, Clarissa Martínez.

In those districts, the population of Latino voters is greater than the margin of victory between the two presidential candidates of 2016, so their vote will be “final” in the configuration of the Congress, said the activist.

Martinez made the remarks as part of the annual UnidosUS conference hosted by Washington from July 7 to 10 that brings together hundreds of Latino leaders in the national capital.

Six of the “competitive” districts, according to the Cook Political Report classification, are located in California, while Texas and Florida, states with a large Hispanic population, have 3 contested districts each.

In California, which was the state with the largest number of Latino voters in the presidential elections (3.4 million), the Hispanic community represents at least 10% of the populations of six of these districts (CA-10, CA-25, CA-39, CA-45, CA-48 and CA-49).

In Demarcations 10, 25 and 39 of the Californian state, Hispanics represent almost a quarter of the voter census.

“These districts are competitive and also have a large number of Latinos, two elements that undoubtedly make Hispanics play a key role in the upcoming elections in November,” the founder of the California Civic Engagement Project (CCEP) told Efe. Mindy Romero

In Florida, for its part, the Hispanic community will have “great importance,” according to experts, in the election of the representatives of the districts FL-18, FL-16 and FL-27, places where they represent almost 60% of the population. total of voters.

On the other hand, in Texas there are also three circumscriptions (TX-7, TX-23 and TX-32) in which the voters of Hispanic origin will be conclusive in the final result.
About 13 million Latinos voted in the last presidential election of 2016, a figure 13% higher than that registered in the 2012 elections.

Despite this record two years ago, “the Latino community is still underrepresented in the electoral process because of the limited investments in registering Hispanic voters,” Romero said.

This was one of the issues that the speakers emphasized most during their conference, in which they lamented the “little approach” of the candidates to that part of the demography.

“There are still many candidates who do not invest the time and resources necessary to establish a relationship with these voters, which will be vital to decide the balance, they must position themselves in matters that matter to Hispanics,” Martinez said.

In this sense, Martinez and Romero agreed to claim “more investment” to mobilize young, new and infrequent voters of the Latino community.

The goal of the Republicans in these elections is to break the tradition, which suggests that the party of the incumbent president usually loses an average of 32 seats in the House of Representatives and 2 in the Senate, the result of the wear and tear of government.

In the lower house, which will completely renew its 435 seats in the November elections, Republicans have a majority of 24 legislators; while in the Upper House, where a third of the hundred seats will be elected, the advantage is small and only two senators.

The Democrats consider it essential to turn the wave of indignation generated by the controversial style and policies of the president, Donald Trump, especially among women, youth and racial minorities, into enthusiasm for their candidates in the House.