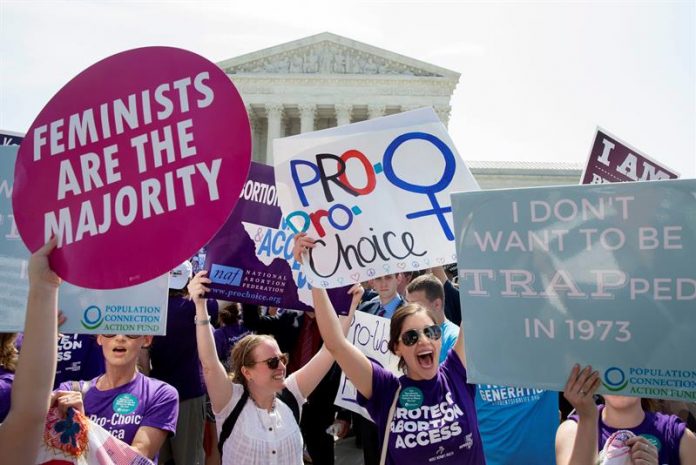 The imminent nomination of a new judge of the Supreme Court of the USA. has put abortion at the center of public debate in the country, where conservatives and progressives have played for four decades with the passions generated by the possible illegalization of this practice in some states.

While US President Donald Trump prepares to announce a replacement for newly retired Justice Anthony Kennedy on Monday, some are rubbing their hands and others are clamoring to heaven at the thought of a right turn in the maximum court will alter the reproductive rights of women.

And, almost half a century after the Supreme Court legalized abortion throughout the country, the prospect of a possible change to that decision (Roe contra Wade, 1973) continues to move votes and political allegiances in the country, probably with more fury than any other social issue.

“Why is not this issue solved when we have had a Supreme Court decision for more than 40 years? It’s one of the mysteries of American politics,” a law professor at Columbia University, Carol Sanger, author, told Efe. from the book “On abortion: ending pregnancy in the 21st century.”

Part of the answer is, according to Sanger, in a calculation made by the Republican Party in the late 1970s, “when they realized that there were many political benefits if they put the case of Roe against Wade against the voters” conservatives .

“There was practically a political decision to keep alive the idea of ​​annulling that judicial decision, instead of accepting it, as it happens in other countries that legalize abortion,” the expert said.

Trump himself, who two decades ago declared himself “very much in favor” of the right of women to decide on his pregnancy, joined that trend and surrounded himself with strong social conservatives like his vice president, Mike Pence, who this year predicted that his generation would come to see the end of legal abortion in the United States.

But Democrats have also politically used the fear of ending legal abortion in the country, and the leader of that opposition party in the Senate, Chuck Schumer, warned last week that “choose whoever you choose” Trump for the Supreme, ” it is too likely that Roe will be repealed against Wade. ”

“Everyone is exaggerating (the possibility of the Supreme Court annulling that decision.) There is a kind of hysteria right now, everyone wants to score political points with this,” especially in view of the November legislative elections, Sanger said.

Beyond the political moods, the experts consulted by Efe agree that it is possible that the new conservative majority in the Supreme “annul Roe against Wade, but there are also reasons why he might not do it”, in the words of Sanger.

Kennedy, the judge who is now leaving the Supreme Court, was conservative but moderately oriented, and in 1992 he voted in favor of upholding the decision that had legalized abortion two decades earlier.

“While Kennedy was in court, there was no real prospect of the annulment of the legalization of abortion nationwide,” said Mary Ziegler, a law professor and author of a history of the abortion debate in the United States. since 1973

But the decision supported by Kennedy in 1992 also determined that states could legislate on pregnancy in many cases, and since then “the tendency in the Supreme Court has been towards a greater regulation of the right to abortion,” an expert in Efe told Efe. court and professor at the University of Wisconsin, Sara Benesh.

Trump has promised to replace Kennedy with a judge who has the approval of the most conservative right, so “you can expect him to be open to reviewing or at least limiting” the 1973 decision, according to Benesh.

If the new majority in the Supreme Court annulled that ruling, that would not make abortion illegal throughout the country, but the matter would be passed on to the states, which could prohibit the interruption of pregnancy “but they would not be obliged to do so,” Ziegler explained. .

“Each state would have to decide if it criminalizes abortion and to what extent, and if it punishes women for it,” he added.

The United States has never grossly penalized women for not carrying a pregnancy to term: there were some cases “very infrequent in the nineteenth century,” because their husbands or doctors were usually blamed for that, according to Sanger.

But it is likely that even a strong conservative majority in the Supreme Court avoids a controversial annulment of the 1973 ruling, and instead opts to “accept cases that allow them to subtly dismantle the rights related to abortion,” Ziegler said.

In practice, that “can leave women in some states without the opportunity to exercise that fundamental right, unless they have enough money.