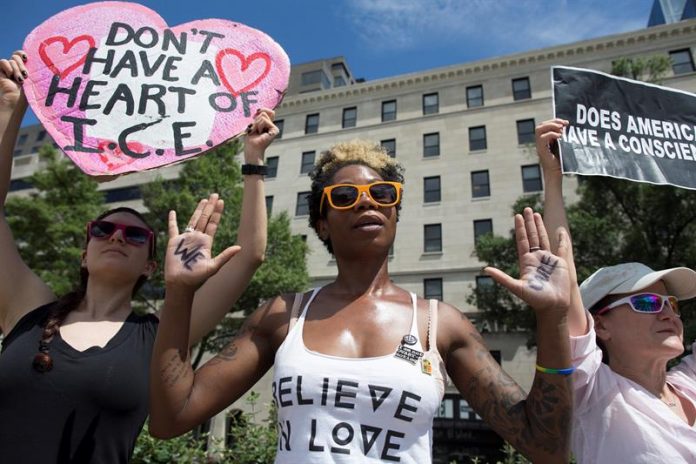 The policies of separation of immigrant families of the president, Donald Trump, have united the women of the so-called “Resistance”, of which a thousand marched today in Washington to guarantee that they will do everything possible so that they do not apply their anti-immigration rhetoric.

Hundreds of women toured the streets of the US capital to claim against the president and stop their immigration measures, especially those that caused the separation of families who arrive in the country irregularly after crossing the border with Mexico.

Women was the only category that encompassed the diverse group that advanced today to the Capitol. Among their ranks were Arabs, Latinas and whites; immigrants, citizens and asylees; adolescents, adults and seniors.

Alternating melodies that could be heard in a Gospel Mass, slogans against the atypical president and sepulchral silences, around a thousand women dressed in white gathered convinced that “the united people will never be defeated”, and that “yes, we can ”

Although the separations at the border were reversed by a decree by Trump last week, the plural group of women protested today against the “lack of humanity” of the tycoon and the consequences of his last executive order, which ends the division of immigrant families but it keeps them stopped.

These separations were the result of the so-called “zero tolerance” policies, which were implemented in April and which involve the criminal prosecution of those who cross the border irregularly, which means the removal of children.

Those measures remain in effect, but not for adults who move to the US. with minors.

One of the participants in the march today was Caren Fiallos, Honduran, undocumented and single mother. Since 2010, she lives with the uncertainty of being deported from the country she arrived in 2000, waiting to find a solution that prevents her from being expelled from the country, where her 15-year-old daughter is a citizen.

She, hopeful in a change that comes out of the legislative elections of November, sees an “uncertain” future, blurred, at the expense of the Administration not deciding to separate her from her daughter, who “as a citizen, wants to study here, live, work, buy a house, “he tells Efe.

Solidarity with Central American immigrants is the motive that moves Cynthia Avalone, Nicaraguan and US citizen who arrived in the country in 1988 fleeing from the Sandinista revolution, according to Efe as she walks towards the Department of Justice.

“It is important that we unite, it is important to show solidarity for the children, I am a mother and I can not imagine what they suffer being separated from their children,” says Avalone.

At one point on the way to the Capitol and the headquarters of Justice, hundreds of women begin to shout “be ashamed, be ashamed”. They just passed through the door of the Trump Hotel in Washington.

Erika Andiola, a Mexican raised in Arizona, believes that it is necessary to end the Immigration and Customs Enforcement Service (ICE) so that the situation improves.

The former spokesperson for Democratic Senator Bernie Sanders marches to make clear that “we must ensure that people are not detained because they are undocumented, that those who seek refuge are received with love and not with cages.”

“We have not left,” says Andiola, who emphasizes that immigration policies have increased in severity with Trump, but that they were already restrictive with his predecessor, Barack Obama.

She is a “dreamer”, the term used to refer to the undocumented youth who came to the country as children and from whom many were covered under the Deferred Action (DACA), a program approved by Obama in 2012 and which was canceled by Trump in September when it welcomed 690,000 people.

Social pressure, media and other political actors already implied that Trump revoked the separation of families and now the women of the so-called “Resistance” also want to stop the arrests of undocumented families.