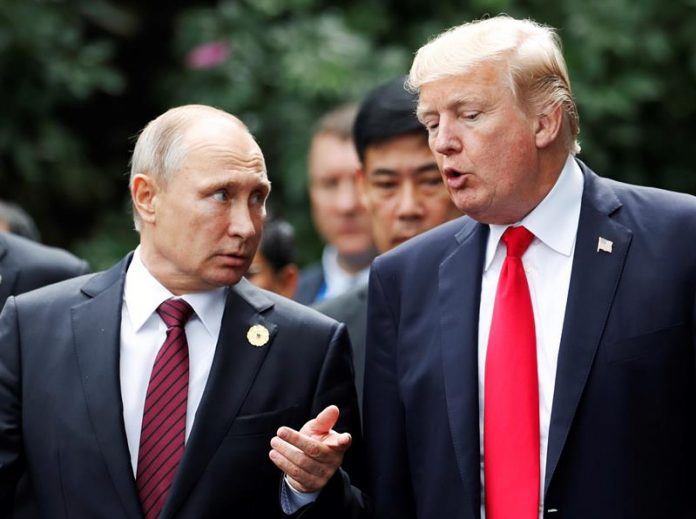 In a moment of tension with his allies and after an approach to North Korea, the president, Donald Trump, is now seeking to make amends with his Russian counterpart, Vladimir Putin, at the summit scheduled for July 16 in Helsinki, confirmed at last hours.

Trump has moved away from some of his country’s traditional allies in recent months by adopting several controversial decisions, while trying to minimize differences with Putin and has approached what until now was considered one of the greatest enemies of USA, North Korea.

And it is that the tycoon met on June 12 in Singapore with the North Korean leader, Kim Jong-un, at a historic summit that concluded with a statement for which Pyongyang pledged to carry out a denuclearization in exchange for Washington provide guarantees of survival to the regime.

Regarding the meeting with Putin, the agenda of the meeting, which has been corroborated simultaneously by the Kremlin and the White House, is still unknown.

It will not be the first time that the two most powerful leaders in the world meet, as they met at the G20 summit in July 2017 in Germany and they met again informally last November at the Asia Pacific Economic Cooperation Forum (APEC) in Vietnam.

Even so, a more extensive bilateral meeting was being sought for months, since the ties between both countries are quite deteriorated.

Trump inherited from his predecessor, Barack Obama, a damaged relationship with Putin’s Russia, especially because of the war in Ukraine and the annexation of Crimea, which caused numerous US economic and diplomatic sanctions against Moscow.

Added to this are the differences over the Syrian conflict, since while Russia supports the government of President Bashar al-Assad, supports part of the political opposition and some armed groups opposed to the Damascus Executive.

In spite of these differences, during the electoral campaign that took him to the Presidency in 2016, Trump announced that he would improve ties with Moscow and disgraced himself in praise of Putin.

Already at the G7 summit this month in Canada, Trump proposed that Russia rejoin this select group of major economies, which was expelled in 2014 after the Russian annexation of the Ukrainian territory of Crimea.

It was precisely at that summit that its departure from allies such as the EU, Canada and Japan was made clear by its imposition of tariffs on imports of steel and aluminum from these States.

In a photograph published on Instagram by German Chancellor Angela Merkel, this distancing was clear with Merkel herself and other leaders, such as French President Emmanuel Macron and Japanese Prime Minister Shinzo Abe, standing around Trump, who appears with folded arms and sitting pouting.
In addition, the president has adopted other controversial decisions, which have earned criticism from the allies, such as the US withdrawal. of the nuclear agreement with Iran and the Paris pact on climate change, or the recognition of Jerusalem as the capital of Israel.

Within the country, a possible rapprochement with Russia is troubling the Democratic opposition due to the likelihood that Trump’s current environment facilitated Russian interference in the 2016 presidential elections.

In fact, since May of last year, special prosecutor Robert Mueller is investigating the possible links between members of the Trump campaign and the Kremlin, which the intelligence agencies accuse of interfering in those.

Precisely, the president tweeted on Tuesday in this regard: “Russia continues saying that they have nothing to do with the Intrusion in our Election,” said Trump, who asked “Why do not you look at Hillary / Russia? so much corruption. ”

The president referred to what was his rival in the 2016 election, former Secretary of State Hillary Clinton, very critical of Putin who has been labeled as “authoritarian, white supremacist, xenophobic” and willing to “break” the EU.