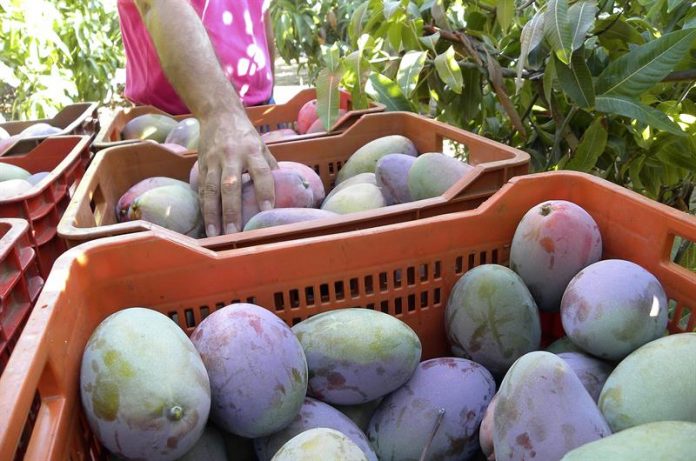 Mango, raw sweet potato and even ground are the most intercepted products in Puerto Rico airports from the list of banned to transport to the continental United States for the risk of pests.

The Director of Plant Health for Puerto Rico and the Virgin Islands of the Animal and Plant Health Inspection Service (APHIS) of the United States Department of Agriculture (USDA), Leyinska Wiscovitch, today explained to Efe that this agency works to make better known among the population what products can not be brought to the US.

Wiscovitch said that in Puerto Rican airports mango and raw sweet potato are the banned vegetables that are most often detected by USDA agents, although the variety of plants is very broad.

The official indicated that these are very common vegetables in the Puerto Rican diet that many people do not suspect are included in the list of products prohibited for transport to the United States.

The plant, native to Brazil, is another vegetable that can not be taken to the US, which is usually detected by USDA agents when Puerto Rican citizens try to transport them to the continental United States.
The guanabano and the currant are other prohibited plants intercepted in Puerto Rican airports to citizens of the Caribbean island.

“One of the most peculiar things that USDA agents have found is land,” says Wiscovitch, explaining that it may contain nematodes, organisms that can cause pests in the United States.

Wiscovitch stressed that the list of exotic plants that Puerto Ricans, often unaware of the risks involved, try to bring to US soil includes, for example, rambutan, which can be accompanied by pests and harmful insects.

The official stressed that the risks caused by these plants should not be taken lightly, after recalling how, for example, a snail species came to Florida from Puerto Rico a few years ago – through plants – causing health problems in the area of Jacksonville, just one example of the need for extreme control measures.

The Department of Agriculture of Puerto Rico warns that invasive species harm indigenous crops and trees, so if left unchecked they can devastate entire agricultural industries, destroy jobs, threaten food supplies and incur losses worth thousands of dollars. millions of dollars in damages and collateral expenses.

The federal authorities remind that a single fruit or a plant that carries a pest or invasive disease can cause loss of commercial income and an increase in the price of food, which is why the population is asked to inform previously.

For all these reasons, the USDA APHIS inspects all fresh fruits, vegetables, plants and flowers that are directed to the continental United States from Puerto Rico, in designated areas at the airport of departure.

The list of items that are not allowed to be transported from Puerto Rico to the United States includes pigeon peas, cuttings of cotton, cactus, citrus fruits and plants with soil.
Other prohibited products are live insects, cotton seeds, snails, land for cultivation and sugarcane.

The USDA recalls that pests can travel long distances in fruits, vegetables, plants, firewood, outdoor items and even vehicles.

People can also transport harmful pests when they buy plants or seeds online, when returning from trips with agricultural items or by mailing a homemade fruit gift.