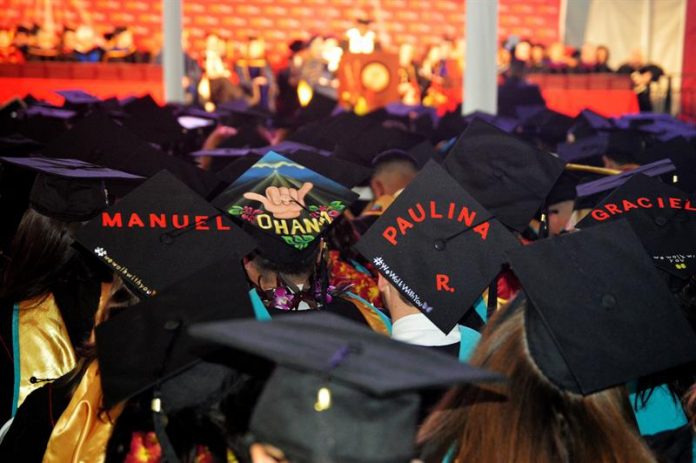 Latinos are half as likely to have a higher degree than whites, according to a report released today by The Education Trust, which argues that the current university graduation rate of Hispanics and African-Americans is lower than that of Anglo-Saxons in 1990.

22.6% of Latinos and 30.8% of African-Americans between the ages of 25 and 64 have at least a university degree, compared to 47.1% of white adults with this educational level.

“The data we have analyzed shows us that the gap is very significant, and it is still greater in Latinos, who are half as likely to have a grade as whites,” says Efe Andrew Nichols, director of Higher Education Research of The Education Trust.

The data revealed by this organization, which promotes educational equity for minority and low-income students, shows that in 1990 Anglo-Saxons achieved a university degree by 10 percentage points more than Hispanics do today (32%) compared to the current 22%).

“We did it (the study) to call attention to this issue and to make the states clear about the need to increase equity in the levels of study in both Latinos and African-Americans,” says Oliver Schak, policy researcher at Efe. higher education and co-author of the study.

Since 2000 and until 2016, the period in which the Hispanic adult population has increased 72% in the United States, the growth of Latino adults who had a higher degree has been slower than that of the Anglo-Saxons, 7% compared to 9%. , 5%, especially in postgraduate degrees or masters, experts say.

“Actually the gap is getting bigger, we have to try in the near future to increase the increase for Latinos,” says Nichols.

Likewise, the study reflects a “very significant” difference with respect to Latino adults born in the United States, which 30% have a higher degree-a figure similar to that of African Americans-and those who were born outside the country, whose rate of graduation is 17%.

“This means that those born outside the US or undocumented immigrants do not have access to aid to pay tuition,” says the expert.

This is what Tiffany Jones, Higher Education Policy Director of Education Trust, believes that the fact that many of these students are not eligible for scholarships means a “very big” barrier to accessing a university education.

“States have to act firmly to focus their efforts on increasing support for Latinos so they can achieve more graduation,” says Efe Jones, who urges institutions to focus their strategies according to different races.

The differences are also palpable among Mexican-Americans, 17% of whom have a university degree under their belt, Puerto Ricans (30%) and Cuban-Americans (40%).

This ethnic diversity means that in states such as Florida, where the Cuban population is higher, progress since 2000 has been rated with the highest score, while states such as California, Texas or Arizona remain in the last positions in terms of the evolution of the graduation gap.

The state in which this educational gap is greatest is California, followed by Colorado, Nebraska, Massachusetts, Connecticut and Illinois.

Having a higher diploma represents, according to the report, an added value beneficial to society, by paying more fees, being more likely to participate in elections, volunteering and being healthier.