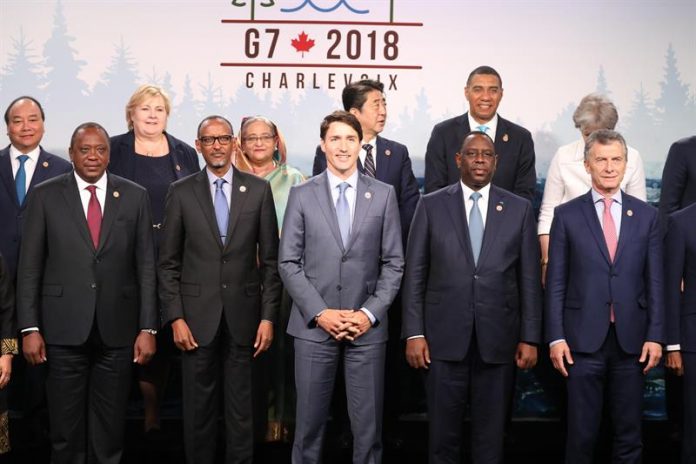 Western leaders have decided to ignore the ebullient reaction on Twitter of US President Donald Trump, who withdrew his support for the G7 Summit statement after the end of the meeting, an attitude that could be repeated in the future.

A spokesman for Canadian Prime Minister Justin Trudeau said the Canadian government is focused “on everything we have achieved here at the summit.” The prime minister did not say anything he has not said before, both in public and in private conversations with the president. President”.

The statement of the Canadian Prime Minister’s Office avoids responding directly to the furious tweets that Trump sent from his Air Force One plane on his way to Singapore to meet North Korean leader Kim Jong-un, hours after the G7 summit ended. in La Malbaie (Canada).

In two tweets, Trump accused Trudeau of uttering falsehoods during the final press conference of the meeting, insulted the Canadian prime minister, accusing him of being “submissive”, “dishonest” and “weak” at the summit, and threatened to impose tariffs. to Canadian automobile exports.

Trump also ordered his officials to “withdraw” US support. to the final communiqué although it had already been signed by all the delegations of the G7 countries.

Today, several of the other G7 countries reaffirmed their support and validity of the final communiqué, in effect ignoring Trump’s reaction as they already ignored him at the summit when he proposed readmitting Russia to the club of nations.

France was one of the countries that most clearly indicated that it was not “serious” to try to withdraw the support of the final communiqué of the G7 hours after its signature.

It was precisely the French president, Emmanuel Macron, who, 24 hours before the official start of the 44th G7 Summit in Canada, pointed out that the best way to deal with Trump’s inconsistency and arbitrariness is to ignore him.

Last Thursday, during a press conference with Trudeau in Ottawa, the French president said, referring to Trump, that no leader “lives forever”, pointing out that his stay in the White House will end and relations between the United States and the United States. rest of your allies will return to normal.

Yesterday, the republican senator John McCain made clear through Twitter that the Trump presidency is an anomaly that does not reflect the true political will of the United States and that the G7 has the support of the majority of Americans.

“To our allies: the bipartisan majorities of Americans continue to be in favor of free trade, globalization and support alliances based on 70 years of common values, and Americans support them even if our president does not,” McCain said.

On Thursday, Canada’s Foreign Minister, Chrystia Freeland, avoided responding directly to the question of whether the best strategy of US allies and partners is to follow Macron’s suggestion and weather the Trump presidency’s storm.

To Efe questions, Freeland declared that his work “is not to choose the leaders of any country but to work with them”, especially those of their “democratic partners”.

But today, even Trump’s economic adviser, Larry Kudlow, suggested in a way to ignore the two tweets of the president by reneging on the G7 Summit and attacking Trudeau.

Kudlow said on CNN today that Trump’s attack was rather a statement in the face of the gallery since the US president is meeting in a few hours with Kim Jong-un.

“(Trump) is not going to let a Canadian prime minister overpower him, he will not allow showing weakness when he is going to negotiate with North Korea,” Kudlow explained.