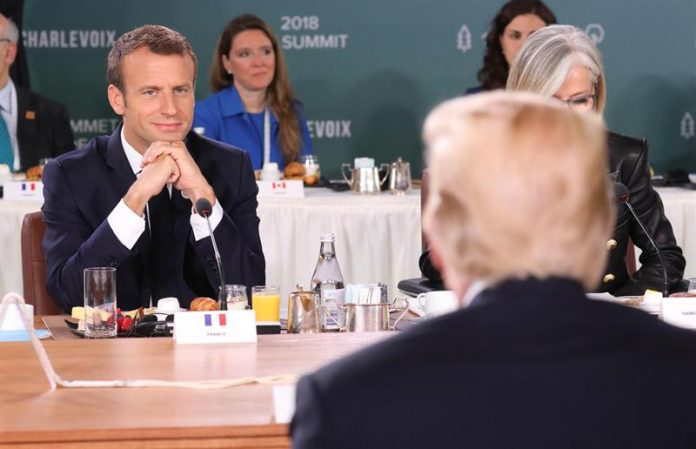 The 44th G7 Summit ended in the Canadian town of La Malbaie with an “agreement to disagree” between the United States and its partners but at least allowed, after arduous negotiations until the last minute, to agree on a joint declaration.

Before the meeting began in La Malbaie on Friday, located about 140 kilometers northeast of Quebec, few considered that the 44 G7 Summit would end with a final communiqué agreed by the seven partners as has been the tradition for years.

The differences between Europe, Canada and Japan with the United States in relation to international trade, climate change and the nuclear agreement with Iran, seemed insurmountable, especially because of the rhetoric displayed by US presidents, Donald Trump, and France , Emmanuel Macron, on Twitter.

Therefore, when the Canadian Prime Minister, Justin Trudeau, the host of the meeting, appeared today before the international press and declared that “we have a final communique signed by all”, the Canadian delegation burst into applause.

The Canadian joy was short lived. In an unusual decision, Trump denied the agreement while flying from Canada to Singapore and said on Twitter that he had given orders to his representatives “not to endorse the statement” after listening to Trudeau’s press conference.

The US president also insulted Trudeau, whom he accused of being “submissive”, “dishonest” and “weak” at the summit.

However, it is not clear if Trump’s withdrawal order has practical consequences since the communique is already signed and the US he had not committed himself to making financial contributions to the points approved in the text.

In his final press conference, Trudeau also made it clear that the summit ended without agreement on the most thorny issues, that no one got Trump to change his mind about trade or climate change and that the greatest achievement of the meeting was that the discussions They were “frank and open”.

The inability to convince Trump about the imposition of customs duties on its partners and main allies was also clear today when the US president gave a press conference minutes before abandoning the summit prematurely.

A defiant Trump threatened its partners, and the other countries of the world, by stating that the United States will stop trading with those countries that impose tariffs on US products.

Trump repeated his speech that the rest of the countries have taken advantage of the United States for decades, that international trade is “unfair” for Americans and that “we are like the piggy bank that everyone is stealing”, so it will end to that situation.

The US president added that he will do “whatever it takes” to make international trade fair with the United States.

In its final communiqué, the G7 undertook to “modernize” the World Trade Organization (WTO) to make it “fairer as soon as possible” and expressed its willingness to reduce trade barriers, both tariff and non-tariff, and subsidies.

The joint statement also condemns Russia for the chemical attack in the British town of Salisbury and the annexation of Crimea at the same time that the G7 was ready to “take more restrictive measures” against Moscow to “increase costs” on the country.

“We demand that Russia cease its destabilizing behavior, the weakening of democratic systems and its support for the Syrian regime,” the statement added.
In this sense, Trump insisted today that the G7 should accept Russia again in its midst, even though the proposal was rejected by the other six partners in the discussions held during the summit.

In terms of trade, the G7 also requested the start this year of negotiations on international standards against “industrial subsidies” that distort the market and “actions that distort trade” by state companies.

And the G7 also committed in the final statement to take action against “foreign elements that want to undermine our democratic societies and institutions, our electoral processes, our sovereignty and our security.”

The statement expressed “deep concern over the lack of respect for human rights and the basic democratic principles in Venezuela as well as the uncontrolled economic crisis and its humanitarian repercussions.”

In the chapter of discrepancies were climate change and the use of fossil fuels.

The United States did not sign, together with its partners, the declaration that “strongly recommends” the implementation of the Paris Agreement and the promotion of the fight against climate change through collaboration.

For its part, the USA it was the only country that subscribed a point in the final communiqué to strengthen “global energy security” through the use of “all sources of energy”.