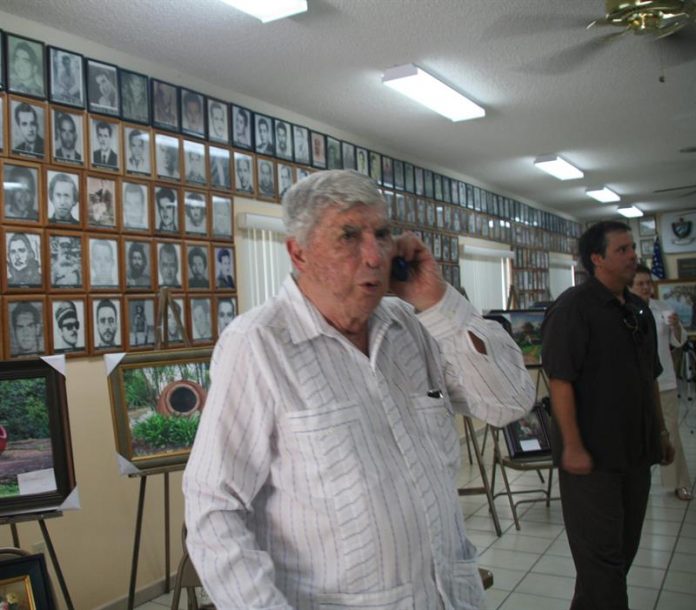 More than a thousand people, most of them Cuban exiles, fired the anti-Castro Luis Posada Carriles at a funeral held in Miami’s Little Havana, Martí Noticias reported today.

The website of the radio and television station that broadcasts from the United States to Cuba today echoed the ceremony held on Sunday at a funeral home in that Miami neighborhood.

Family members, friends and members of Cuban organizations in Miami attended the funeral to bid farewell to the anti-Castro fighter and former agent of the Central Intelligence Agency (CIA) of the United States, who died on May 23 at the age of 90.

Among the attendees were some of those who, like Posada Carriles, were part of the Assault Brigade 2506, as volunteers are known to have participated in the 1961 disembarkation at Playa Girón or Bay of Pigs (Cuba) in order to overthrow Fidel Castro, a failed operation, because they were defeated.

A handful of Bay of Pigs veterans, wearing military caps, paid tribute to Posada Carriles among flower wreaths in the colors of the Cuban flag, as well as exile figures such as Luis Conte Agüero, Ángel de Fana and others who reviewed his figure at the funeral, Martí News said.

It has not been reported if he was buried or incinerated.

Posada Carriles, who suffered from throat cancer, died becoming a figure admired for much of the exile in Miami, while the Castro regime considered him a terrorist and even regretted that he had died without having paid for his crimes.

The state-run newspaper Granma, the official communications organ of the ruling Communist Party of Cuba, said on the day of his death that Posada Carriles was “the greatest terrorist” in the Western Hemisphere.

The Government of Cuba has insisted for many years on its accusations against Posada Carriles, whom he considers the “intellectual author” of the blasting of an aircraft of Cubana de Aviación that exploded in mid-flight in 1976 after taking off from Barbados.

However, Posada Carriles always denied having to do with the attack that caused the death of the 73 occupants of the plane.

He spent almost nine years in prison for that terrorist action in prisons in Venezuela, a country in which he had naturalized after the Revolution in Cuba.

He was also imprisoned in Panama accused of planning an attack against Fidel Castro during an Ibero-American summit.

Even in the United States, Hernández was imprisoned and tried for irregularities in entering the country after his release from prison in Panama.

His lawyer since 2007, Arturo Hernández, with whom he had a great friendship, told Efe on the day of Posada Carriles’ death that yes “there was an obsession” in him was “the freedom of his Cuban people”, not Fidel Castro.

The anti-Castro and former CIA officer died curiously at age 90, the same age at which his nemesis, Fidel Castro, died, and like him in bed, said the lawyer.

The day Castro died on November 25, 2016, Luis Posada Carriles said it was “unfair” that he had died in the “best hospital” on the island and “so late” (90 years), although he said that he saw his death as a “triumph”. efe