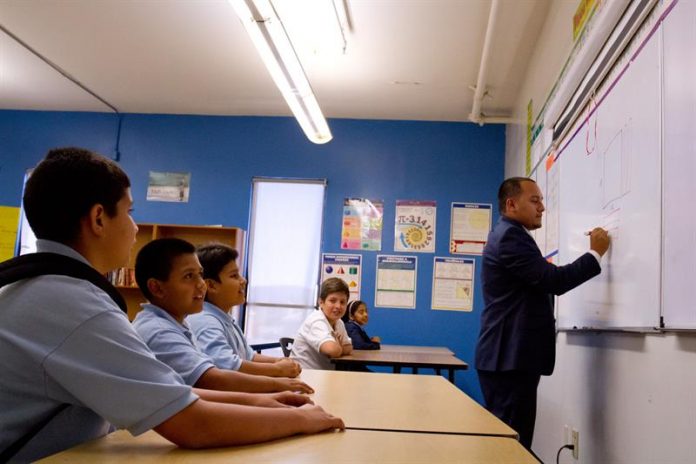 Arizona school districts have been forced to recruit foreign teachers to cover the state’s deficit, one of the least paid to educators.

Alfredo Gutiérrez, former president of Maricopa Community Colleges, told Efe that Arizona faces one of the most severe crises in the education sector due to budget cuts that began in 2007 and forced schools to hire teachers of other nationalities. , mostly Filipinos.

School districts claim that they can not find enough American teachers willing to work for the low salary that is offered, which is more than $ 10,000 below the national average of $ 59,000 per year.

According to Gutiérrez, since 2015 the Basic Education District of Pendergast has recruited more than 50 teachers from the Philippines who receive J-1 visas, which allows them to work temporarily in the United States, but they do not offer any path to citizenship.

“They prefer to bring the Filipinos because they are the most capable to compete and with documents, they can easily enter the school, but they also recruit Mexicans, Colombians and some from Africa,” he explained.

More than 2,800 foreign teachers arrived in the country last year through the J-1 program and the list is headed by the Philippines, followed by Jamaica and China, according to the State Department.

“Anyone can be a teacher in Arizona, the experience does not count, anyone who applies can take the job, even if they are foreigners, even if they do not have the necessary certificates, this because of the low salaries, but we hope that with the ‘RedForEd’ movement this changes “he said.

That movement organized a strike of teachers in Arizona that lasted six days, until the governor Doug Ducey signed at the beginning of May a plan that grants them a salary increase of 20%.

The agreement gave the teachers an increase of 9% for autumn and another more than 5% in each of the next two years. Such increases are given apart from a 1% salary increase awarded last year.

Gutiérrez expects the increases to change “the education landscape in Arizona, since teachers prefer to migrate to Utah, California or New Mexico, where they have better pay.”