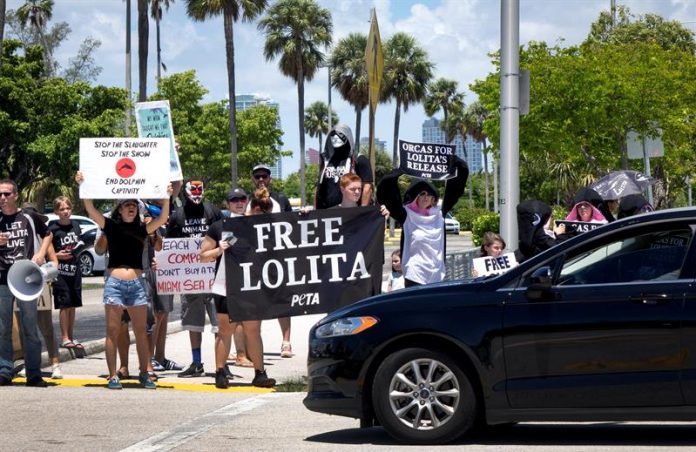 Members of the native tribe of the Lummi returned today to the aquarium of Miami to request the release of the killer whale Lolita, in captivity in this water park since 1970 when it was captured in the northwest of the United States.

After a journey of more than 4,800 kilometers (3,000 miles), members of this native tribe, whose territory is located in the state of Washington, crossed the country to reach the vicinity of the Miami Aquarium and sing traditional songs with drum beats, accompanied by people in favor of releasing the orca.

In honor of Tokitae, as the members of this tribe call Lolita in their native tongue, during the rally a totem with the image of the orca was shown, as well as placards asking for the release of the mammal.

The twenty people who were part of the call, despite heavy rains recorded by the effects of the subtropical storm Alberto, urged the owners of Miami. Seaquarium, the Spanish group Parques Reunidos, that allows Lolita to reunite with her family in the Salish Sea, from where she was separated at four years of age.

“She is a precious part of our family and important to the ecosystem of the Salish Sea, we must bring her home to be reunited with her family,” said Jay Julius, head of the Lummi Nation, also known as sea ​​”and present in the manifestation.

Julius pointed out that for the native tribe it is a “sacred obligation” to take Lolita back to her “home”, in the open sea, given that for decades she lives in a tank in which, they denounce, she can hardly swim taking into account which is about six meters long.

Last March, Julius and other members of this tribe held a rally to claim the release of the mammal from the Miami Seaquarium and former Miami Beach Mayor Philip Levine, candidate for the Florida Governorate in the elections. next November.

At that time, and as I had indicated before, Levine criticized the animal being in captivity and described the case as “modern slavery”.

According to the environmental group People for Ethical Treatment of Animals (PETA), the killer whale has also lived a lonely life for more than three decades, after his partner Hugo was killed with head blows against the small pond they shared. efe